For those who suffer from claustrophobia, German artist Wolfgang Laib’s signature wax rooms might pose something of a problem. The walls and ceilings of these cocoon-like chambers—each lit by a bare bulb—are lined with golden beeswax-coated tiles that muffle sound and emit a strong, earthy fragrance, making the small spaces feel even smaller. Since pioneering the method in 1988, Laib has created his temporary rooms in institutions all over the world, from New York’s Museum of Modern Art to Germany’s Kunstmuseum Stuttgart to the Museum De Pont in the Netherlands.

Now the artist has chosen an environment that’s even more drastically confined: a 6-by-7-by-10-foot storage closet at the Phillips Collection in Washington, D.C. And this time his installation, requiring nearly 900 pounds of beeswax, will be permanent. “I once saw a 4,000-year-old beeswax piece in an Egyptian museum,” Laib recalls, “and it had this amazing patina—translucent and a little bit gray, like aged cheese. To me, the effects of time were truly beautiful.”
March is a busy month for the artist, who divides his time between southern Germany, India, and New York. Sperone Westwater is currently showing a selection of his sculptures; Leslie Tonkonow Artworks + Projects will debut an exhibition of his photo- graphs and other works on March 15; and his installation Pollen from Hazelnut, a bright expanse of yellow pollen grains, will be spread out across the atrium floor of MoMA through March 11.

Laib’s new wax room at the Phillips accommodates no more than two visitors at once. It was constructed in the same way as La Chambre des Certitudes (2000), a nook he built inside a granite cave in the French Pyrenees by applying hot wax directly to the stone with an iron. When considering venues for his first permanent creation in a museum, the artist was drawn to the intimate spaces at the Phillips—originally the home of the Phillips family—which suit his cozy alcoves. But the decisive moment came when his longtime friend and Phillips curator-at-large Klaus Ottmann introduced him to the museum’s renowned (and strikingly tiny) Rothko Room.
“People often say that my pollen pieces are like Rothkos on the floor,” Laib says. “But I don’t like this connection because it refers only to similarities in color. Actually, my beeswax works have much more to do with Rothko in that he preferred to exhibit in tight, close spaces, so that his paintings had a concentrated influence on your body.”
“With their smell and their warmth and light,” says Ottmann, “Wolfgang’s wax rooms have the effect of suspending reality for a moment. And that’s something quite magical.” 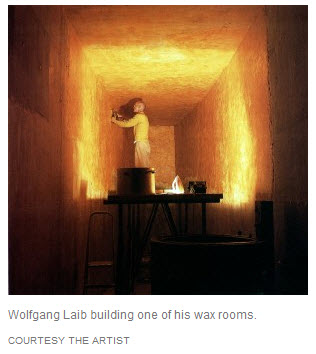