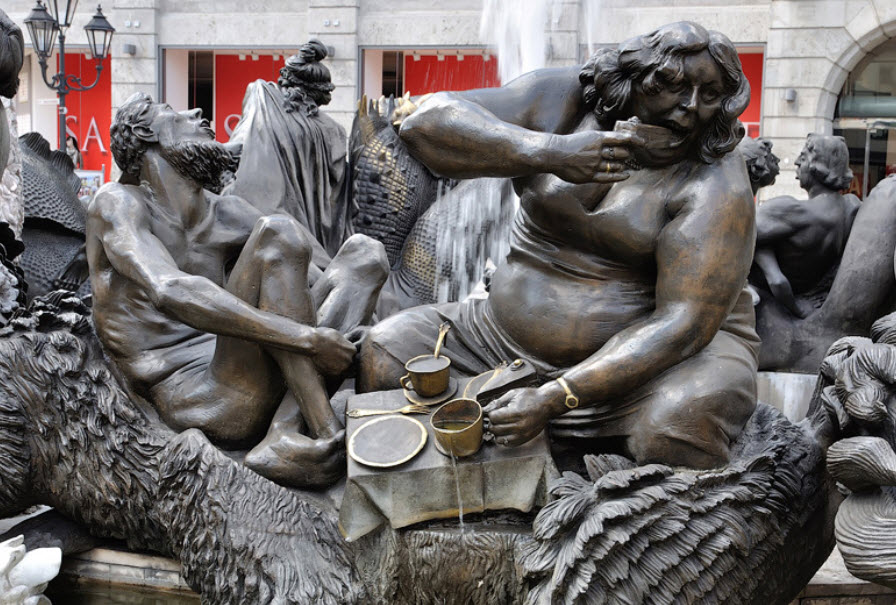 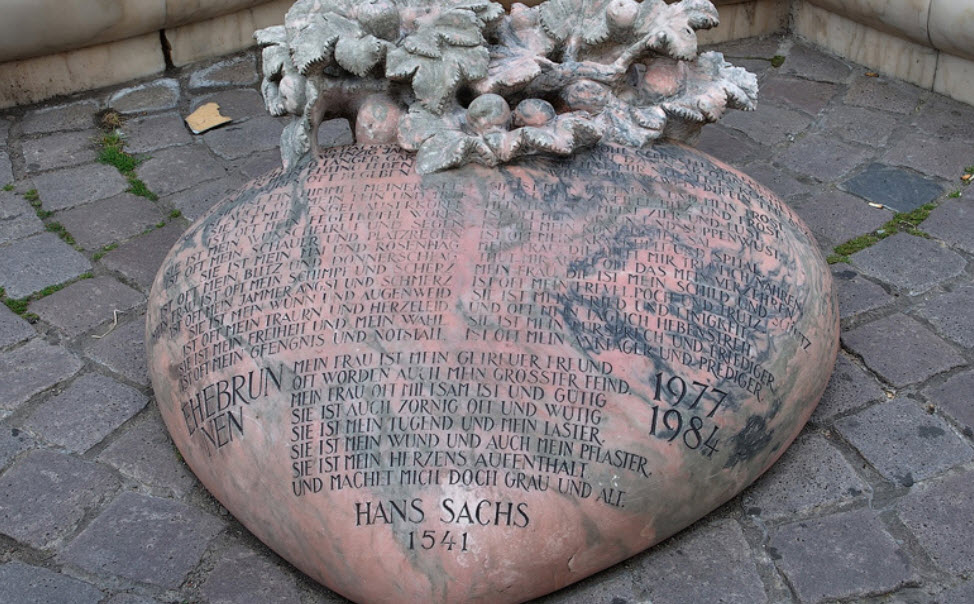 The Marriage Merry-Go-Round (Carousel) fountain is an interesting and controversial work. Situated in a pedestrian shopping area next to the White Tower, it was built in 1984 at a high cost.
The large fountain, a dramatic portrayal of married life from courtship to death, was part of the storm wrought by the design.

The sculpture attempts to describe the sweetness and tribulations of married life that Sachs describes in his poem. The couple progress through life as beautiful happy young people, change into older people with attitudes, and finally turn into skeletons.
Hans Sachs described the various stages of marriage from ardent love through exhausting struggles, ending with the death bed. The fountain's sculptures reflect this text in all its beauty and horror, while Hans Sachs is depicted dancing above a goat and a virginal beauty.
This sculpture seems to specialize in the horrors of marriage with couples strangling each other; couples where one is huge and stuffing her face, while the other is starving and skeletal; couples surrounded by demanding children; couples where one wants to be quiet and the other is blowing a trumpet in her face.

The text of the poem can be found within the fountain, it is incised on the granite heart that points towards the tower. Hans Sachs describes the ups and downs of marriage; his wife is sometimes the angel, sometimes the devil to him.

Weber selected six scenes from Sachs's long list. He designed a roundabout with six carriages, each in the shape of an animal that matches the scene:
- the loving young couple in the swan bed
- the older man holding his wife in chains, tearing off her dress, seemingly ready to take her by force
- eternal fighting of an old, almost skeleton-like couple on a giant lizard
- the caring mother feeding her children in a pelican who, referring to an ancient Christian legend, tears open her breast to feed her offspring with her blood
- the fat woman devouring cake after cake and her desperate skinny husband, carried by a wolverine (in German: "Vielfraß")
- the young beauty, rising from a shell like Aphrodite, and the admiring trumpeter and the billy-goat that represents the lust
On top of the sweet corn cob, Hans Sachs the poet is shown dancing. The nymph of the fountain is kneeling in the water basin below.
The rose column on the opposite side shows the names of the artist and his second wife. 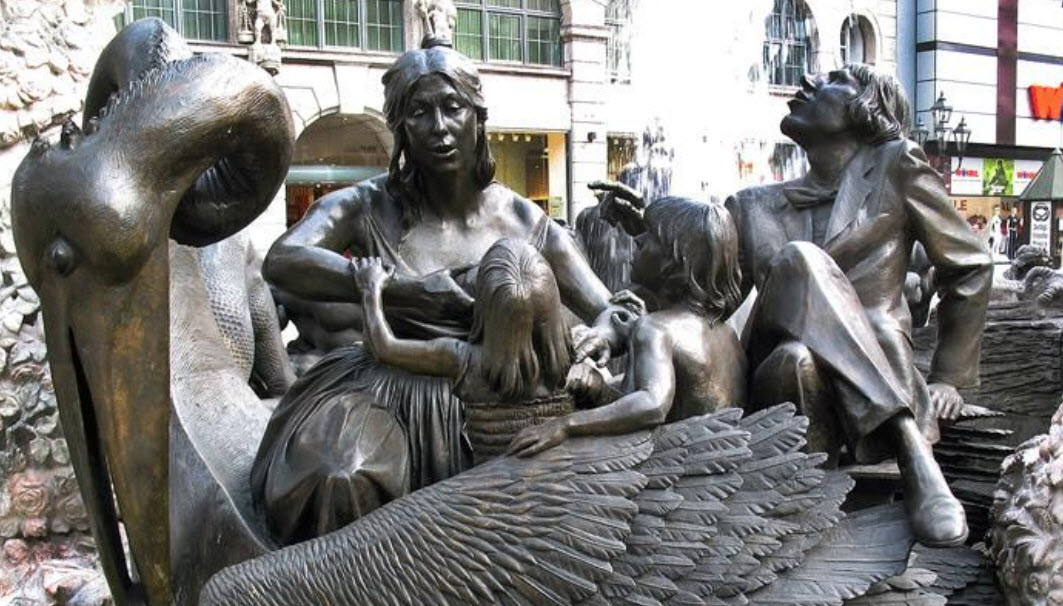 Life, emotions, sex and violence are omnipresent topics. The fountain caused quite some controversies and criticism in the city at first. Considering Weber's sculptures are weird, demonic, choleric and ugly and him as self-righteous personality.
Cavorting couples, chained women, crazed men, strangled swans and giant fish monsters poured all over each other like a surrealists paintings. Love it - or hate it, you absolutely can't miss it. 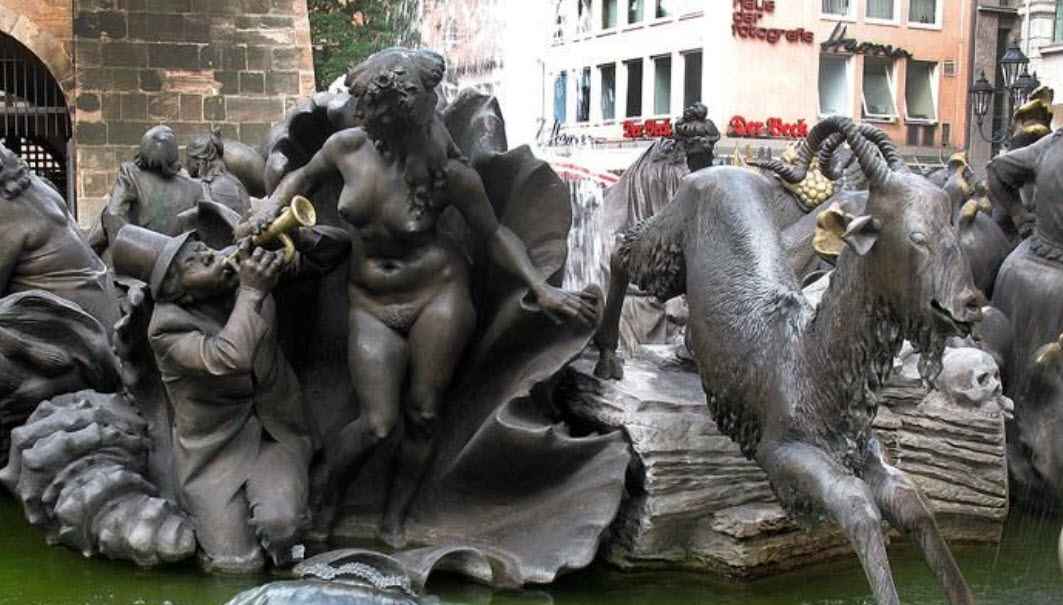 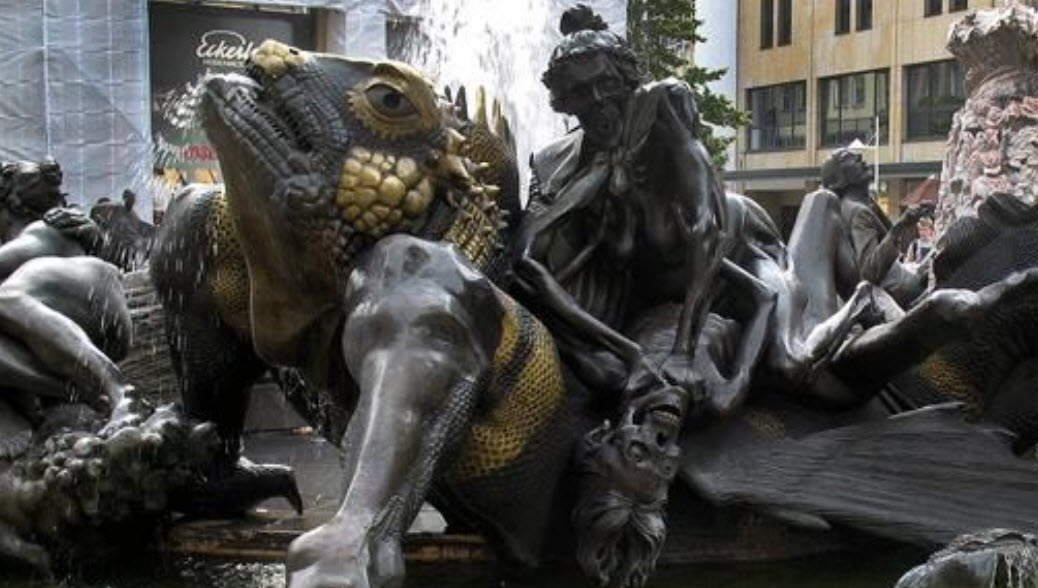 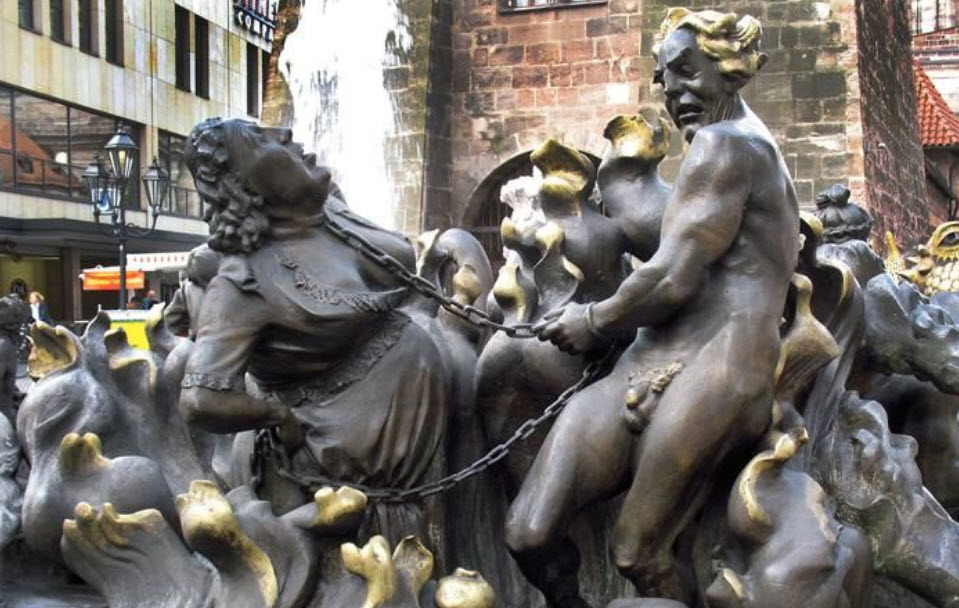 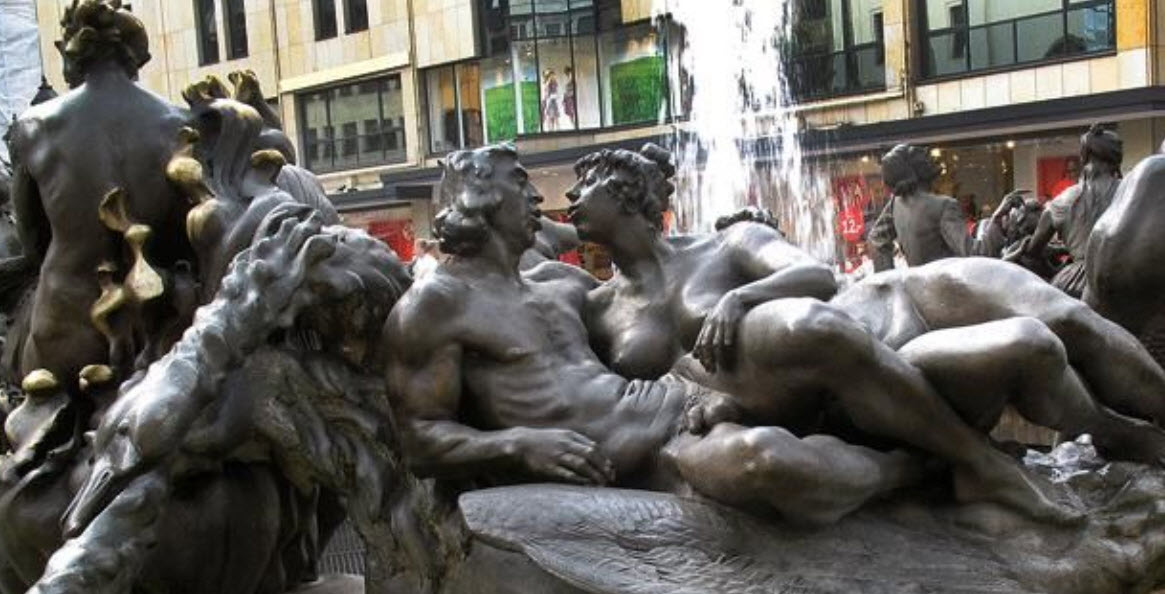