Kippenberger artwork worth €800,000 'cleaned' away

Kippenberger artwork worth €800,000 'cleaned' away


A cleaning woman at a museum in Dortmund who mistook a Martin Kippenberger sculpture for an unsightly mess has destroyed the valuable artwork beyond recognition.
The cleaner at the city's Ostwall Museum went to work on the Kippenberger installation entitled "When It Starts Dripping From the Ceiling" which was valued by insurers at €800,000 ($1.1 million), a museum spokeswoman said on Thursday.

The late contemporary master had created a tower of wooden slats under which a rubber trough was placed with a thin beige layer of paint representing dried rain water. Taking it for an actual stain, the cleaner scrubbed the surface until it gleamed.

"It is now impossible to return it to its original state," the spokeswoman said, adding that the damage had been discovered late last month and that the work had been on loan to the museum from a private collector.

She said that cleaning crews had orders to remain 20 centimetres (eight inches) away from artworks but it was unclear if the woman had received the directive from the external company that employed her.

Works of art not infrequently fall victim to zealous cleaners. In 1986, a "grease stain" by Joseph Beuys valued at around 400,000 euros was mopped away at the Academy of Fine Arts in Düsseldorf, western Germany. 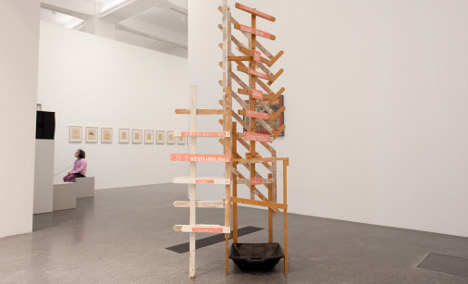 http://www.guardian.co.uk/artanddesign/2011/nov/03/overzealous-cleaner-ruins-artwork
Posted by art wonder every day at 13:17