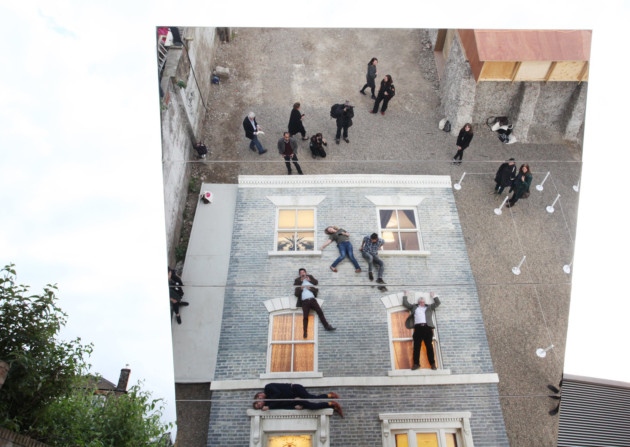 Conceived by Argentinian artist Leandro Erlich, Dalston House in Ashwin Street forms part of the Beyond Barbican summer events which sees gigs, festivals and performances extend beyond the walls of the multi-arts venue this summer. 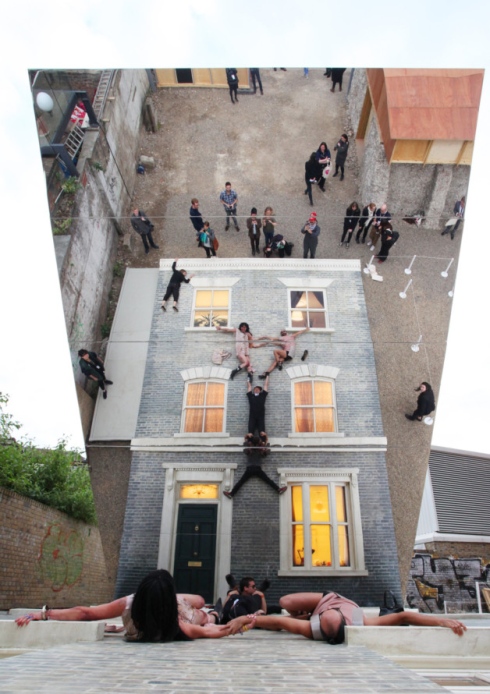 A playful new art installation gives the impression visitors are defying gravity, as they hang off the side of a 19th century townhouse.
As they appear to sit on window ledges and scale walls, participants are in fact lying, sitting or standing flat on the floor and the bizarre mirage is created by a mirrored surface positioned overhead at a 45 degree angle.
Curator Alona Pardo believes visitors will embrace the creation and that it will provide “summer fun with a more serious edge”.
“It’s really playful and highly participatory and relies on viewers interacting to make it come to life,” she said.


“It’s clever but so simple once you understand you see that it makes total sense.”
Erlich has created similar projects in Buenos aires, Paris and Tokyo, each one reflecting the architecture of the region.
He designed and decorated the façade – complete with a door, windows, mouldings and other architectural details – to evoke the houses which previously stood on the Dalston block before they were bombed during the Second World War.
“It’s like a phoenix rising from the ashes,” said Ms Pardo.
“Predominantly what he’s looking at is perception and ways of seeing through illusionary tricks, his works are optical illusions,
“He doesn’t hide the manner in which it’s built, he wants to reveal ways of looking at the world and defining our own realities.”
She continued: “What’s bespoke is the mirror structure, it’s not a mirror but it’s a mirror film, called a polymeric film.
“It’s pretty fragile, and it’s usually used in theatre.
“It would just be too heavy if it was a real mirror and the cost would be prohibitive, you couldn’t keep it at 45 degree angle, you’d need such a big rigging system at the back to keep it up.”