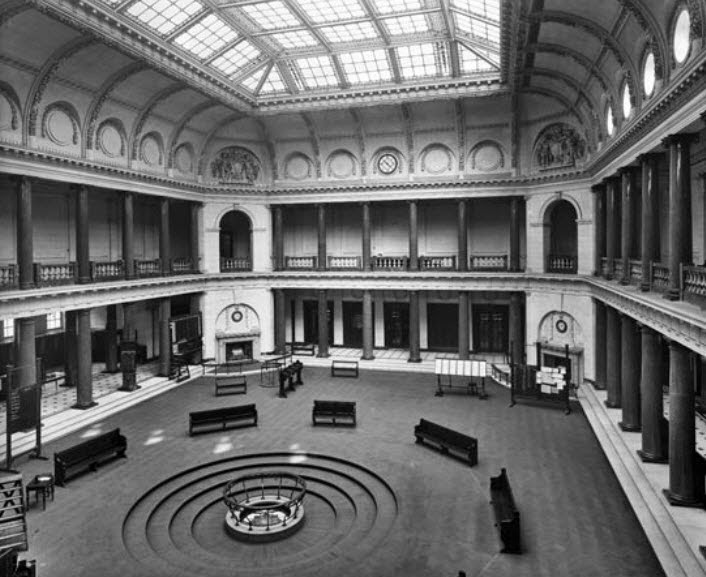 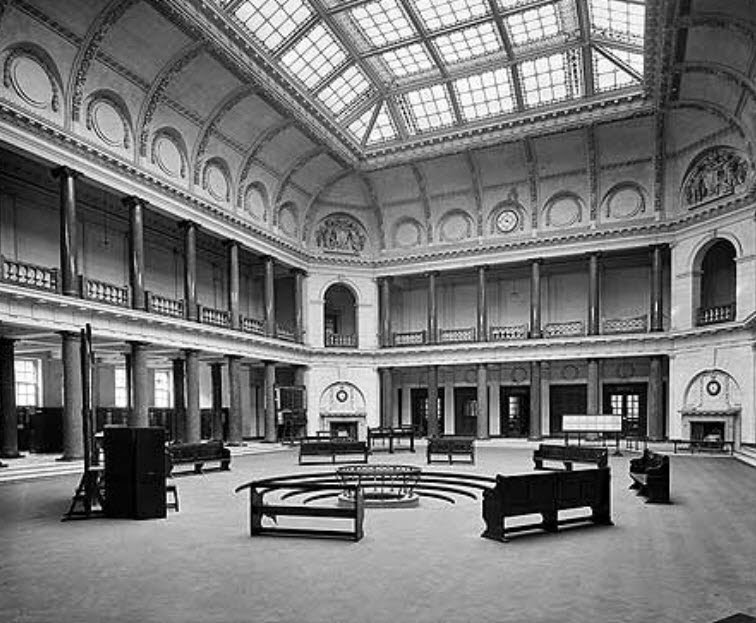 The interior of the trading hall or 'exchange' in the Liverpool Cotton Exchange. The Cotton Exchange was built in 1906 to the designs of Matear and Simon, to provide a venue for the trading of imported raw cotton destined for the Lancashire mills. The finished goods were then, in turn, sold across the world through the Manchester Royal Exchange. The Edwardian Baroque frontage to Old Hall Street was demolished in 1967 and replaced with a modern office facade. 1907  Photographs by Bedford Lemere & Co

The Cotton Exchange was purpose built in 1906 and once housed Liverpool’s thriving cotton exchange. There are reminders of its intriguing history to be found throughout, from the cotton emblems on Edmund Street to the old granite columns within some of the office spaces.

It acted as the centre of the cotton trading world, with telephones and direct cables going to the New York, Bremen and Bombay! The original ornate facade of the building was replaced in the late 1960's with Cotton House office space. The statues that once adorned the facade can still be found around the building. Navigation and Commerce sit in the courtyard, and a Portland Stone statue of Liverpool’s The River Mersey can be found on Old Hall Street.


A city built on cotton Cotton Exchange © Liverpool Record Office, Liverpool Libraries
Liverpool has been shaped by the many people and places involved in the cotton trade.
Liverpool is a cosmopolitan city and the global nature of the cotton trade contributed to this. There were brokers from all over the world based here in the 19th century, including Germany, Prussia, Russia, Greece, the USA and India.
Many of Liverpool’s famous names were made from cotton, including the Rathbones and the Holts. Wealthy cotton merchants and brokers lived in fine houses. Many lived around Sefton Park in the late 19th century.
The cotton trade in Liverpool could not have functioned without the many others who enabled it to run smoothly. The dockers, warehousemen, carters, clerks and message boys were all vital. There is a popular myth that cotton bales were used in the foundations of the Liver building. This is probably no more than a story, but it shows how important cotton is to Liverpool’s history.

Cotton was the largest and most important trade in the city, accounting for almost half of the imports and exports that went through the port.
In the 17th century, cotton came into Britain through London from the Middle East. In the 18th century, the new plantations in the West Indies, Brazil and America started to grow cotton. Liverpool had existing trade links with these areas, and so cotton began to arrive in the Mersey.
The first American cotton was unloaded in Liverpool in 1784. There were only eight bags. Less than forty years later, half a million bales were arriving each year from America. Other countries also supplied cotton, including Brazil, Egypt and India. By 1850, cotton accounted for almost half of the city’s trade. Over 1.5 million bales were imported.
The finished goods from Lancashire mills were also exported from Liverpool, accounting for almost half of the total exports in 1901.

‘The pavement was white with the fluff of cotton samples’

The cotton merchants and brokers met on Exchange Flags to do their buying and selling.
In 1808, an Exchange Building opened, but while cotton brokers took offices there, they preferred to conduct their business in the open square.
The cotton market continued to meet out of doors until the 1880s. The Flags were a place to meet and swap information about the cotton market. New technology like the telegraph and telephone played a major part in moving the cotton men indoors.
A purpose-built Cotton Exchange was commissioned and completed in 1906. This was a state of the art building, with telephones and direct cables to the New York, Bremen and Bombay cotton exchanges. 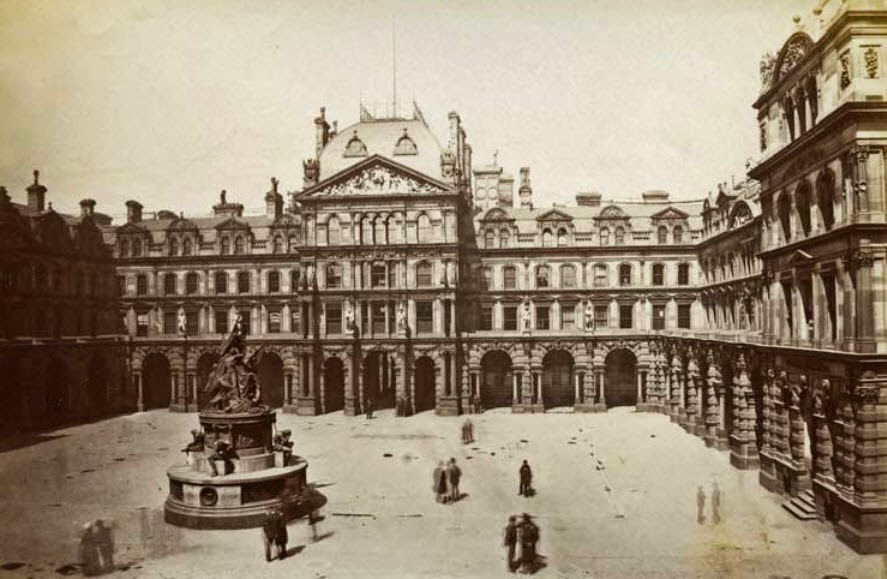 
Why do we say: "Aw, bless his/her little cotton socks"?
Where did it come from and what exactly does it mean, why we say it and where it came from.

George Edward Lynch Cotton was English clergyman and educator, assistant master at Rugby (1837-1852), the young master in Thomas Hughes's "Tom Brown's School Days". He was Bishop of Calcutta at 1858 where he did missionary work and established schools for Eurasian children.
In requests to England he asked for donations of clothing, often emphasizing "warm socks" for the children.
In fact he seems to have held the simplistic view that if the children had warm socks many of their problems, mal-nutrition, disease, racial prejudice, etc. could be easily solved.
Little old maiden ladies all over England spent their time knitting socks for Bishop Cotton and sending them off to India.
He blessed all items used in his schools, and many shipments would arrive labeled:  " Socks for Cotton's blessing" and reportedly even "Cotton's socks for blessing".
Cotton's socks easily became corrupted to cotton socks.
When the Bishop was drowned in the Ganges on October 6, 1866, a despatch was sent to the Archbishop to ask: 'Who will bless his cotton socks?'

Like everything else in England, the expression "bless his cotton socks" has a formidable history behind it. The original expression has quite a different meaning. It originated during the Great Cotton Glut that led to the Panic of 1788-1791 inclusive, when British investors discovered that a bale of American cotton cost less than a long pound of the home-grown stuff. Lord Onan Dipswyck, Chancellor of the Exchequer, was heard to remark pithily that "Cotton" Mather, one of the former colonies' leading exporters, had "run the demmed price so low it wasn't worth the trouble to spill your seed into the ground." Clergymen closed each service with a plea that the Almighty would "bless his [patron's] cotton stocks."

The phrase changed into its present form in 1848, when a printer's devil left a "t" out of the reprinting of the Book of Common Prayer. The fellow was flogged and turned out of the typecaster's guild, but the damage had been done, and the expression has been "bless his cotton socks" ever since.


The phrase is now a term of endearment for a child who has done something sweet. It is also a way of saying: thank-you. Due to its association with "sweet" children and bolstered by Cotton's simplistic views it is often used ironically, thanking someone in a position of authority for suggesting a benevolent, yet simplistic even childish view or solution for a difficult situation.

Sometimes just a humorous thank you like: " I'll dance at your wedding with bells on." 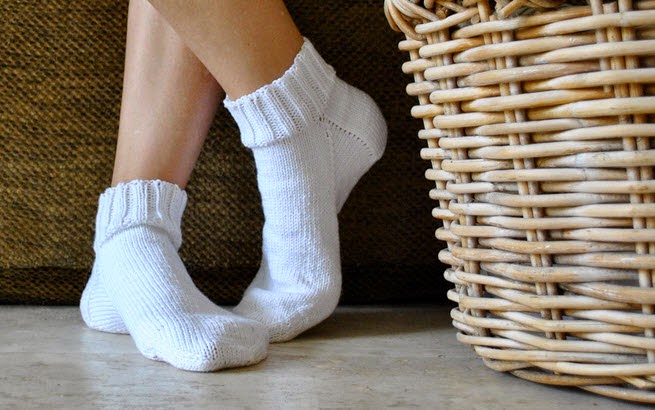