Alan Lee was born in 1947, (which makes him a year younger than I am), in Middlesex, England. He studied at the Ealing School of Art. He moved to Dartmoor in 1975. When Faeries (image at left), which he illustrated with studio mate Brian Froud, burst upon the scene in 1978, the dust wrapper notes that he had "painted dozens of cover illustrations for imaginative fiction." Most of his work prior to 1978 had been in publishing and commercial art, not illustration. One indication of this is that I have only been able to scour up two instances of his work from 1976 and nothing earlier.

At a time when reverence for the illustrators of the Golden Age was uncommon, Lee crafted his style from a mixture of 50 and 60 year old influences. The works of Arthur Rackham and Charles Robinson played important roles in his studies and direction. Like these artists, Lee's medium was watercolor in a classically romantic style. Lee's lack of a black bounding line for his images puts some in mind of Edmund Dulac, another artist from the turn-of-the-century with whom he is compared.

Alan Lee - Once Upon a TimeIn the 1976 David Larkin book, Once Upon a Time - Some Contemporary Illustrators of Fantasy, (image at right), it's very evident just how far out of step with the times he was. With the exception of Froud, none of the 14 other artists in the book grew out of the Romantic tradition of children's illustration that editor Larkin compares them to on the back of the book. But then, Larkin chose Lee and Froud for the cover positions, so we know where his sympathies lay. Plus Larkin had been reviving interest in those earlier masters with a series of books devoted to them, starting with The Fantastic Kingdom in 1974. 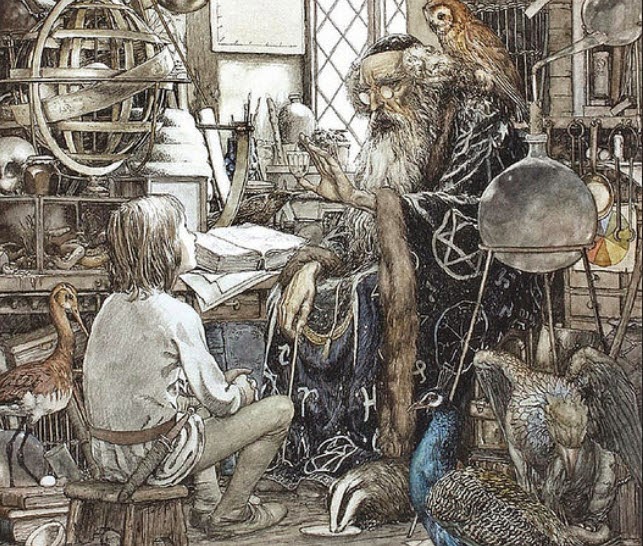 Working on a publication like illustrators is a dream job. Yes, there is a hell of a lot of work that goes into each issue, the bulk of which is never seen by our readers, but the subject matter and the enthusiasm it generates is the primary dynamic which keeps us going.