The Woman Who Gave Birth To Rabbits 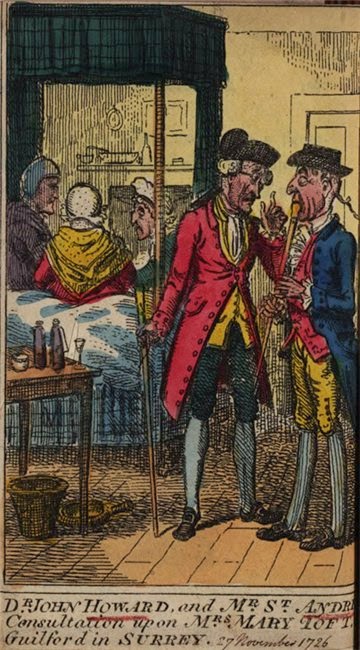 It was September 27, 1726, and Mary Toft was going into labor. The 24-year-old peasant, who worked in hop fields of rural England, called out for her neighbor, Mary Gill. Gill rushed inside Mary’s house and found her squirming in pain. Then something unusual happened. Mary hovered over a bucket and gave birth to a monster.
It was a ghastly but miraculous birth. Gill ran to find Mary’s sister-in-law—a midwife by trade—and told her the baffling news. The “baby” looked like a rotten jumble of animal parts. The family quickly sent the remains to a local surgeon, John Howard, a man with over 30 years of experience delivering babies. Howard inspected the remains, writing that they resembled “three legs of a cat of tabby colour, and one leg of a rabbet . . . in them were three pieces of the Back bone of an Eel.”
Yes, an eel.
Howard was skeptical, but he begrudgingly visited Mary. He complained that she was difficult to work with. “[Mary is] of a very stupid and sullen Temper,” he later wrote. But then it happened before his eyes: Mary gave birth to a baby bunny. It was like magic. Except the rabbit wasn’t coming out of a hat. 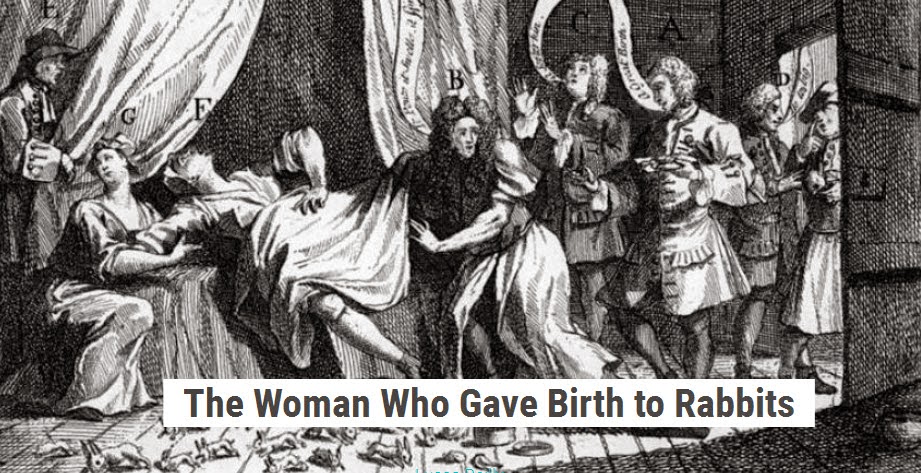 The proud mother of a cat-eel monster, Mary became a local celebrity. Over the next month, Howard witnessed Mary give birth to eight more baby rabbits—and more were on the way. He preserved the bodies in alcohol and sent letters to prominent physicians all over England about the mystery. On November 9, he wrote:


I have taken or deliver’d the poor Woman of three more Rabbets, all three half grown, one of them a dunn Rabbet; the last leap’d twenty three Hours in the Uterus before it dy’d. As soon as the eleventh Rabbet was taken away, up leap’d the twelfth Rabbet, which is now leaping. If you have any curious Person that is pleased to come Post, may see another leap in her Uterus, and shall take it from her if he pleases . . . I do not know how many Rabbets may be behind.


One physician who received Howard’s letter was the surgeon to King George I, Nathaniel St. André. The King was curious, so he sent St. André to investigate. It could not have been a worse choice. St. André was obviously no fan of the scientific method—he believed Mary’s case before stepping in the door. (St. André wasn’t known for his medical prowess anyway. George only gave him the gig because he spoke German, the King’s native language.) When St. André visited Mary, he felt her belly and confidently deduced that the rabbits were forming in her right fallopian tube. The belief cemented when he personally helped Toft deliver a rabbit’s head, her fifteenth.
Over the coming weeks, Mary became a national sensation. On November 19, 1726, Mist’s Weekly Journal reported:


From Guildford comes a strange but well-attested Piece of News. That a poor Woman who lives at Godalmin, near that Town, was about a Month past delivered by Mr. John Howard, an Eminent Surgeon and Man-Midwife, of a creature resembling a Rabbit . . . about 14 Days since she was delivered by the same Person, of a perfect Rabbit: and in a few Days after of 4 more . . . they died all in bringing into the World.

For rabbit-peddling merchants, the gossip was a terrible blow. The public was disgusted. Rabbit stew dropped from Britain’s supper tables. “The public horror was so great that the rent of rabbit-warrens sank to nothing; and nobody, till the delusion was over, presumed to eat a rabbit,” recorded James Caulfield.
Doctors and the public believed Mary’s story because of a popular pseudoscientific theory circulating at the time called “Maternal Impression.” They believed that a mother’s emotions and imagination could cause birth defects and disorders. A pregnant woman who was startled by a rabbit, as Mary claimed, could easily pollute the fetus with her thoughts—leading her to pop out baby rabbits. (This wasn’t just a crackpot idea from the 1700s; it lasted until the early 20th century!)
King George followed the hype closely, so he sent another surgeon, Cyriacus Ahlers, to triple-check. Unlike his fellow medical men, Ahlers didn’t buy into the maternal impression theory, so when he visited Mary, he wasn’t impressed. Despite witnessing several rabbit births—the count had now reached 17—Ahlers remained skeptical.


The Truth is Born

On November 29, Mary was taken against her will to London for study. She was locked away in a bathhouse. With King George’s court expectantly ogling her, Mary suddenly stopped having rabbits. (She did, however, break into a nasty fever, slipping in and out consciousness.) While the Dukes took turns watching Mary, Ahlers dissected some specimens in his lab. Something, he found, wasn’t right. The rabbits appeared to have been cleaved with a knife, and one contained droppings full of corn and hay.
By December 4, the jig was up. A porter was caught sneaking a baby rabbit into Mary’s chamber. When questioned, he claimed she had bribed him. A separate investigation found that, over the past few months, Mary’s husband had bought a suspicious number of rabbits from the town’s merchants. Evidence was mounting. On December 6, the court told Mary they would perform a painful, experimental pelvic surgery to see what made Mary so unique. (To quote, they said they were going to send in a “chimneysweep’s boy.”) On December 7, Mary confessed that it was all a hoax.
For St. André, the timing was terrible. Days earlier, he had published a 40-page pamphlet called “A Short Narrative of The Extraordinary Delivery of Rabbets.” He explicitly bet his name on the account’s authority. His reputation fell into shambles. He lost his job and the whole medical community became London’s laughing stock.

But how did Mary dupe the King’s team of smartypants physicians? Truth is, Mary had been pregnant earlier in the year but miscarried. While her cervix was still open, an accomplice inserted the body of a cat and the head of a rabbit—which her unwitting neighbor helped deliver. As the ruse became more elaborate, Toft sewed a special pocket in her skirt where she hid bits of filleted rabbit. When the doctors weren’t looking, she’d tuck them inside herself and feign labor.
Mary believed it was her ticket out of poverty. (In her words, it was to “get so good a living that I should never want as long as I lived.”) Back then, freak shows featuring human oddities—like conjoined twins and legless magicians—were popular ways to rake in dough. Mary was sure they’d have room for a lady pregnant with rabbits.
But Mary didn’t make a penny from the charade. She was thrown in jail for five months and came home just as poor. When she died in 1763, the parish epitaph read: “Mary Toft, Widow, the Impostress Rabbitt.” Mary Toft, in an engraving based on a painting by John Laguerre in 1726