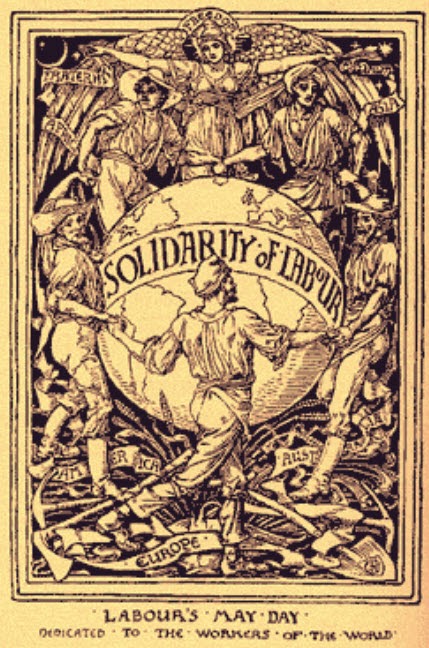 Most people know little about the International Workers' Day of May Day. For many others there is an assumption that it is a holiday celebrated in state communist countries like Cuba or the former Soviet Union.
Also May Day has its origins and stemmed from the pre-Christian holiday of Beltane, a celebration of rebirth and fertility.

In the late nineteenth century, the working class was in constant struggle to gain the 8-hour work day. Working conditions were severe and it was quite common to work 10 to 16 hour days in unsafe conditions. Death and injury were commonplace at many work places and inspired such books as Upton Sinclair's The Jungle and Jack London's The Iron Heel. As early as the 1860's, working people agitated to shorten the workday without a cut in pay, but it wasn't until the late 1880's that organized labor was able to garner enough strength to declare the 8-hour workday. This proclamation was without consent of employers, yet demanded by many of the working class.


Despite the misgivings of many of the anarchists, an estimated quarter million workers in the Chicago area became directly involved in the crusade to implement the eight hour work day, including the Trades and Labor Assembly, the Socialistic Labor Party and local Knights of Labor. As more and more of the workforce mobilized against the employers, these radicals conceded to fight for the 8-hour day, realizing that "the tide of opinion and determination of most wage-workers was set in this direction." With the involvement of the anarchists, there seemed to be an infusion of greater issues than the 8-hour day. There grew a sense of a greater social revolution beyond the more immediate gains of shortened hours, but a drastic change in the economic structure of capitalism.

In a proclamation printed just before May 1, 1886, one publisher appealed to working people with this plea:

War to the Palace, Peace to the Cottage, and Death to LUXURIOUS IDLENESS.

The wage system is the only cause of the World's misery. It is supported by the rich classes, and to destroy it, they must be either made to work or DIE.

One pound of DYNAMITE is better than a bushel of BALLOTS!

MAKE YOUR DEMAND FOR EIGHT HOURS with weapons in your hands to meet the capitalistic bloodhounds, police, and militia in proper manner.

Not surprisingly the entire city was prepared for mass bloodshed, reminiscent of the railroad strike a decade earlier when police and soldiers gunned down hundreds of striking workers. On May 1, 1886, more than 300,000 workers in 13,000 businesses across the United States walked off their jobs in the first May Day celebration in history. In Chicago, the epicenter for the 8-hour day agitators, 40,000 went out on strike with the anarchists in the forefront of the public's eye. With their fiery speeches and revolutionary ideology of direct action, anarchists and anarchism became respected and embraced by the working people and despised by the capitalists.

The names of many - Albert Parsons, Johann Most, August Spies and Louis Lingg - became household words in Chicago and throughout the country. Parades, bands and tens of thousands of demonstrators in the streets exemplified the workers' strength and unity, yet didn't become violent as the newspapers and authorities predicted.

More and more workers continued to walk off their jobs until the numbers swelled to nearly 100,000, yet peace prevailed. It was not until two days later, May 3, 1886, that violence broke out at the McCormick Reaper Works between police and strikers.

For six months, armed Pinkerton agents and the police harassed and beat locked-out steelworkers as they picketed. Most of these workers belonged to the "anarchist-dominated" Metal Workers' Union. During a speech near the McCormick plant, some two hundred demonstrators joined the steelworkers on the picket line. Beatings with police clubs escalated into rock throwing by the strikers which the police responded to with gunfire. At least two strikers were killed and an unknown number were wounded.

Full of rage, a public meeting was called by some of the anarchists for the following day in Haymarket Square to discuss the police brutality. Due to bad weather and short notice, only about 3000 of the tens of thousands of people showed up from the day before. This affair included families with children and the mayor of Chicago himself. Later, the mayor would testify that the crowd remained calm and orderly and that speaker August Spies made "no suggestion... for immediate use of force or violence toward any person..."

http://www.iww.org/history/library/misc/origins_of_mayday
Posted by art wonder every day at 14:12