4000 blue butterflies to swarm a street near you

A swarm of 4000 handcrafted magnetic butterflies will travel across the globe in an ambitious street art project that will connect participants and the art through social media. 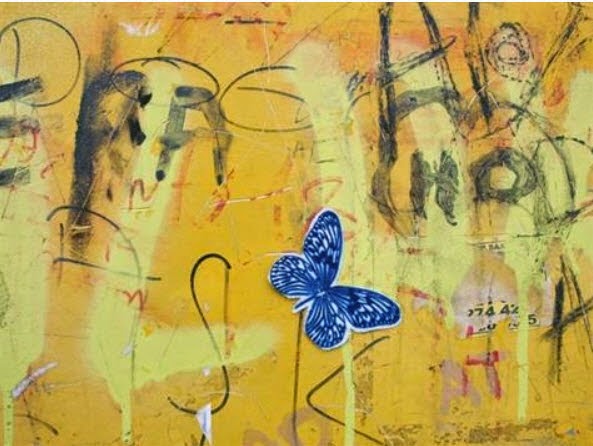 Image: Tasha Lewis' installation in Instanbul, Turkey, 2014. Supplied.
23-year old American artist Tasha Lewis could not travel the world as much as she wished she could so she decided to handcraft thousands of blue butterflies and let them go on an epic adventure instead.
‘I made 4,000 magnetic butterflies, and over the past two years I have installed them in places I lived or visited,’ Lewis told ArtsHub. ‘Now I want to open the project to include people I have never met all over the world.’
Swarm the World will use social media to connect similarly minded people from all over the globe, and use those  digital connections to facilitate real world interactions with each other and their communities through the butterflies.
‘Clearly I could not make this project happen without the internet, shipping technologies, etc; but my hope is that the more meaningful and rich dimensions of the project will come once the butterflies are on the ground in people's hands,’ said Lewis. 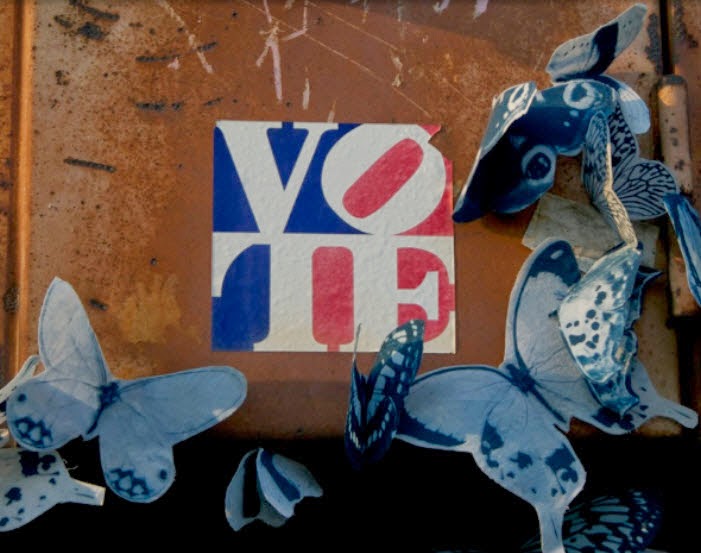 Philadelphia, PA. September, 2012
Participants are required to have internet access during their time with the butterflies and will need to be able to install at least 10 times during the four-week period in which they will host them. ‘I will be selecting the final participants for their geographic spread as well as their compatibility for the project,’ she explained.
The project begins in October 2014 when the successful first round of participants will be sent 10 packages each with 400 butterflies. Each round of recipients will then keep sending the packages to further hosts for a year until the project culminates in a final exhibition in New York City featuring images from the global journey. 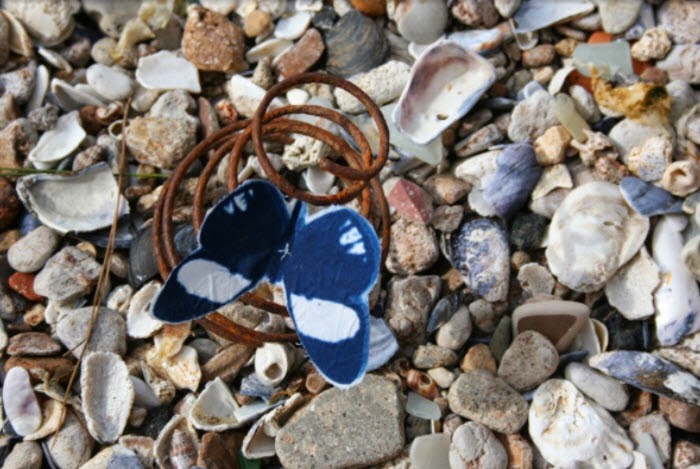 Buyukada, Turkey. March, 2014
The swarm is extremely likely to reach Australia. ‘I have gotten many emails from Australia, and I imagine that the butterflies will be spending a few months exploring your large and diverse country,’ Lewis told ArtsHub.
Initially unsure about the response the project would have, Lewis is now ‘jazzed’ about the overwhelming interest and enthusiasm of potential participants. She is now considering expanding the project even further as she currently has double the amount of email requests as she originally intended.
‘First I am going to suggest that interested participants who live in the same city or township, connect and work on the project together while one of them has the butterflies. This way they can cover more ground and hopefully make a new friend,’ she says. ‘I may also continue to make butterflies over the summer. Every new 400 butterflies I make opens up the possibility for 10 or more new participants, so I may try to expand the project to fill the interest.’ 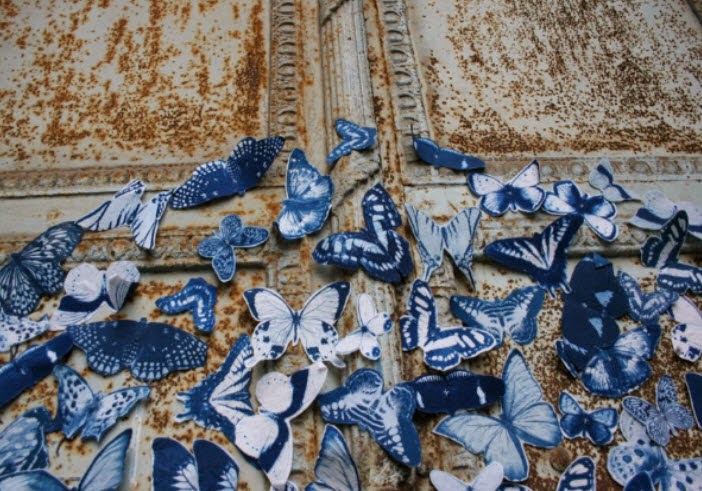 Istanbul, Turkey. March, 2014
Lewis’s butterflies first appeared in a pair of shadow boxes while she was still a student of Swarthmore College in Pennsylvania. ‘While I loved the way they looked, I wanted to find a way to liberate them from the glass.’ Once she had graduated and upon returning to Indianapolis, Lewis decided to sew small magnets into the butterflies and went around downtown placing them on electrical metres, telephone poles and sides of buildings. 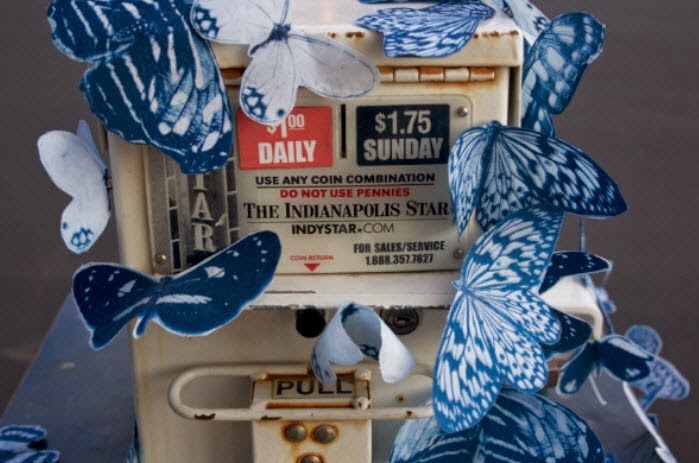 Indianapolis, IN. August, 2012
Naturally blue because of the cyanotype process in which they’re made, each butterfly takes about 10 minutes to make, ‘not including the printing time,’ estimates Lewis. 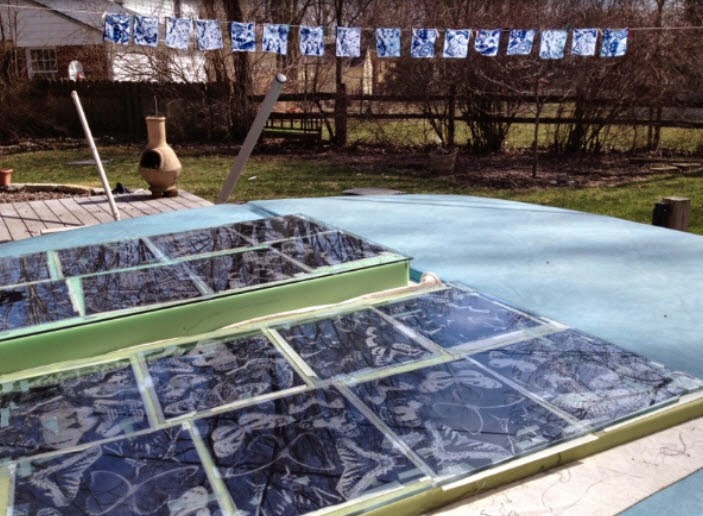 ‘I purchase cotton fabric that is pre-coated with cyanotype chemical and cut that cloth down into small 8.5 x 11 in sheets. I prepare the negatives in pairs that make a kind of sandwich with the cloth in the middle. This allows me to register both sides of the photograph to print exactly. I put them under glass and expose them to sunlight or UV light depending on my set up, print one side for about 20 minutes and then I flip it like a pancake and print the other side. Once that is done I wash the prints out in water. I can print 16 sheets at once— that is about 100 butterflies.’
‘Once in the water I rinse out the unexposed chemical until the water is clear. I add a cap full of hydrogen peroxide to boost the color contrast, rinse again and hang the finished prints out to dry. Once dry, I cut out the butterflies and paint them with a fabric stiffener. This gives the butterflies' wings a crispness that allows you to bend them. Once that is dry, I hand-sew a magnet to the body of the butterfly with thread. 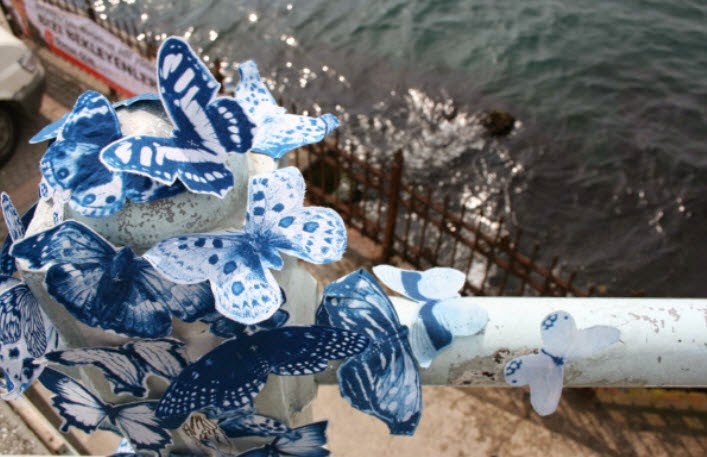 Istanbul, Turkey. March, 2014
But why butterflies?
‘The butterflies for me signify nature as a whole. Perhaps more specifically the idea that plants will sprout up through cracks in the concrete and that wilderness will eventually take over abandoned buildings. I want them to invade the urban environment to remind people of that, to highlight forgotten objects, or just to change the daily routine of urban life.’
Swarm the World is desperately seeking hosts in Africa, the Middle East, Eastern Europe, Polynesia and Antarctica. ‘If anyone is reading this has friends or family in those regions I do hope they will pass it along,’ said Lewis. 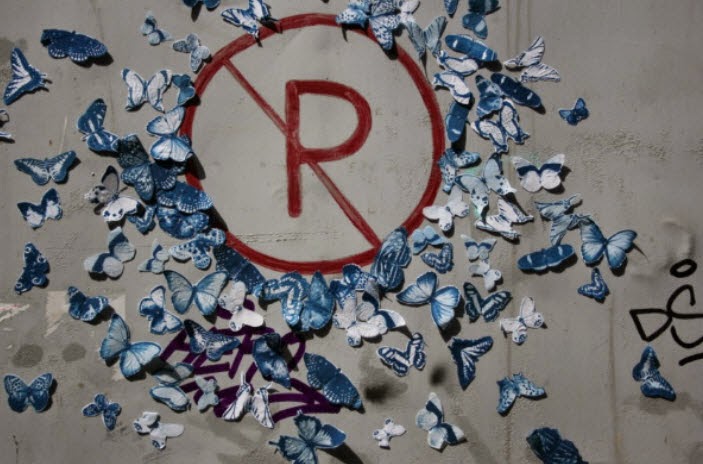