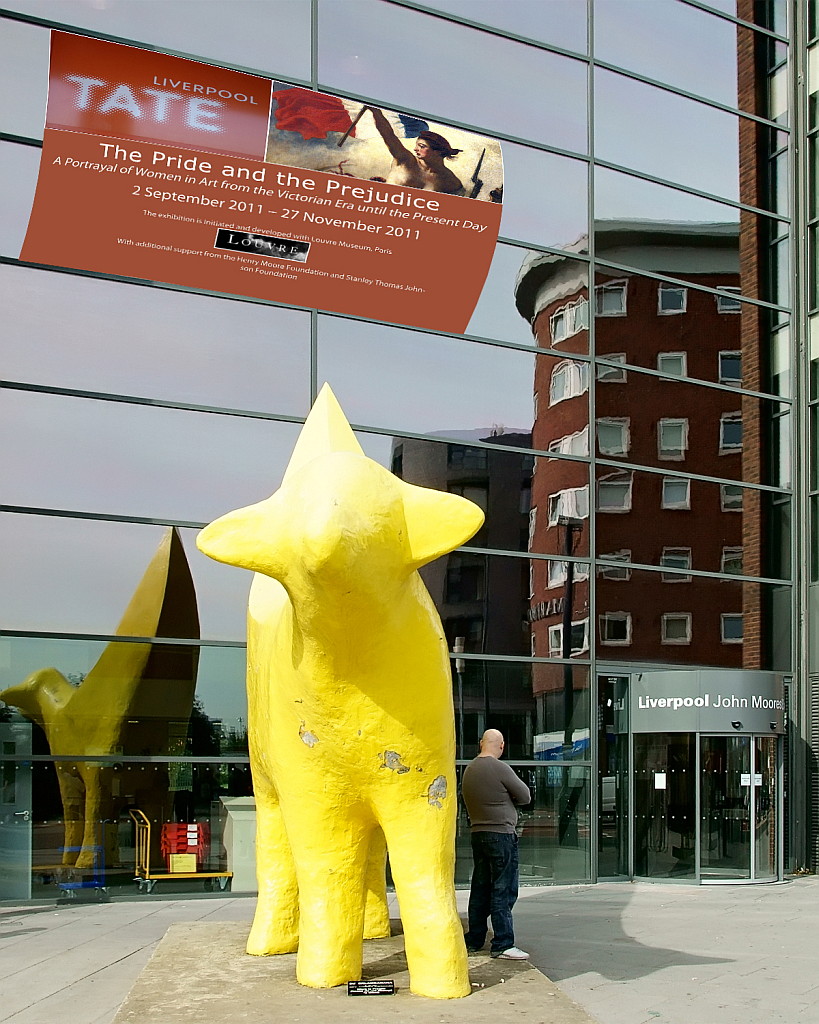 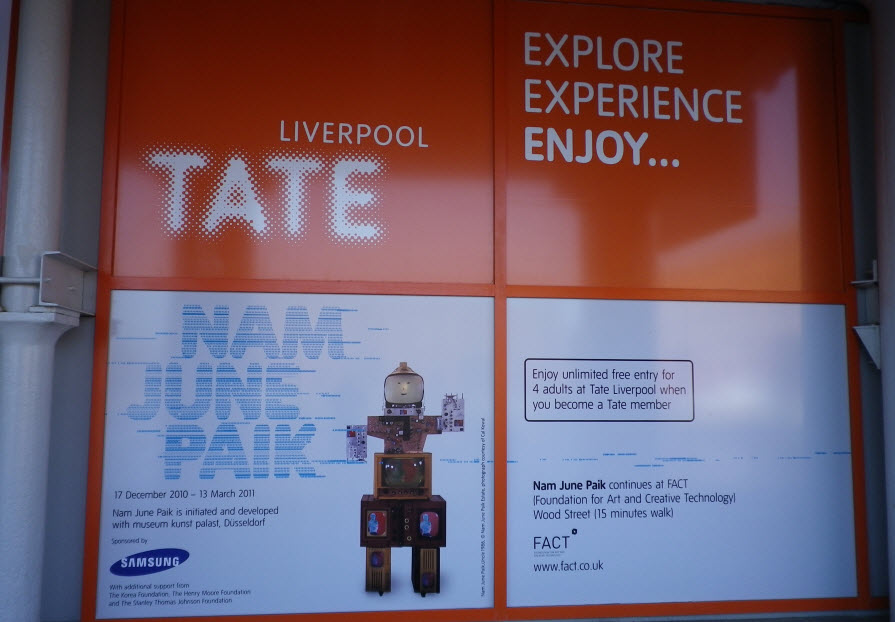 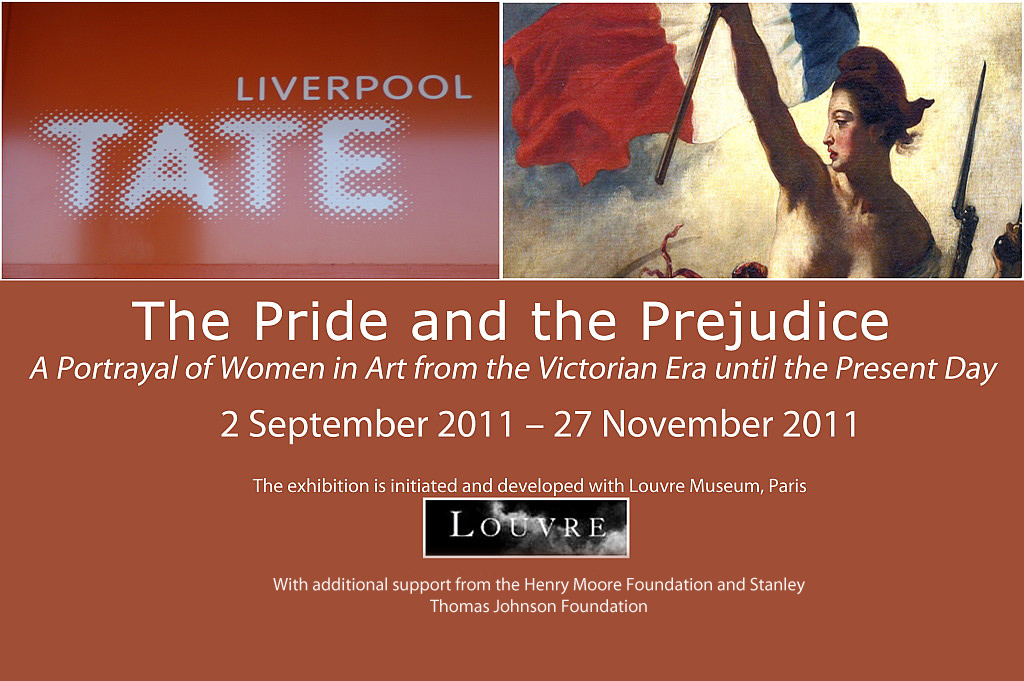 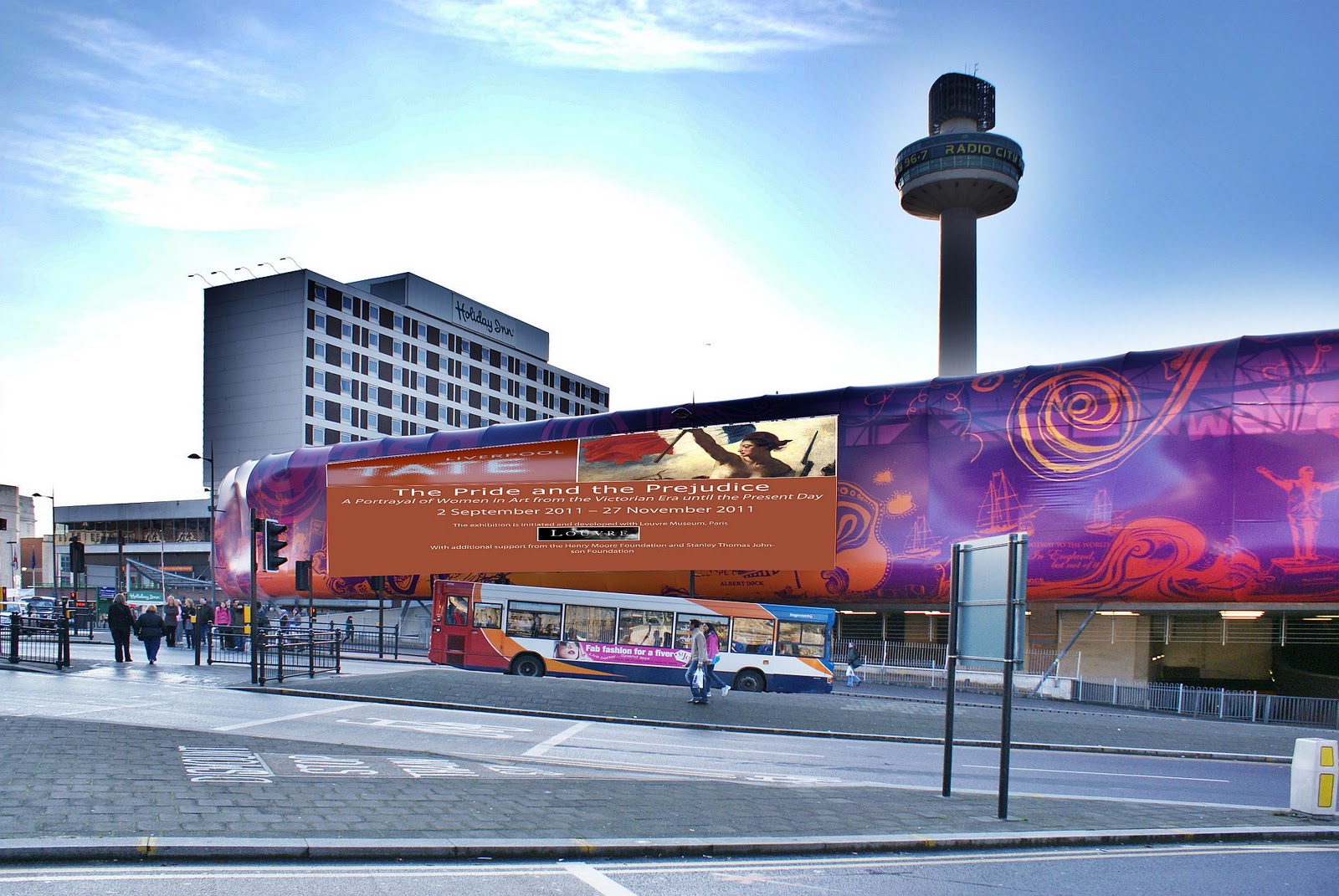 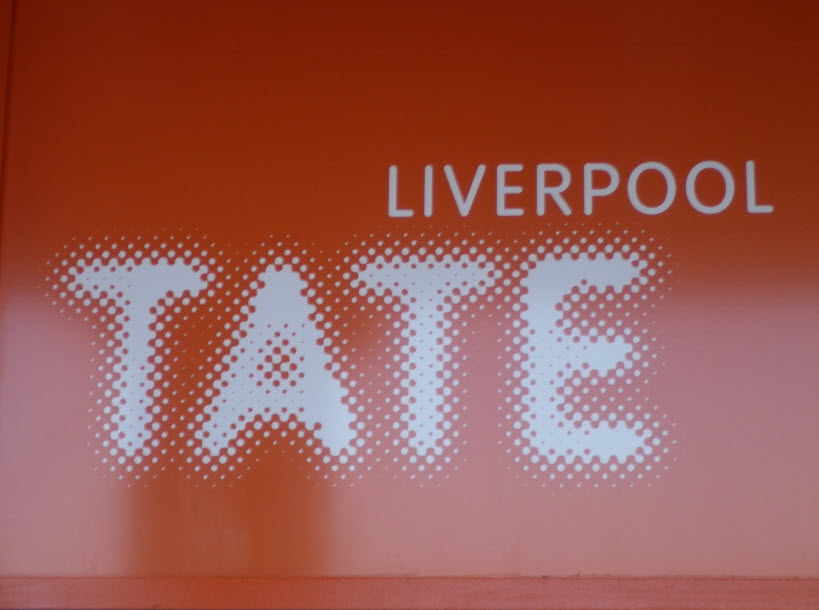 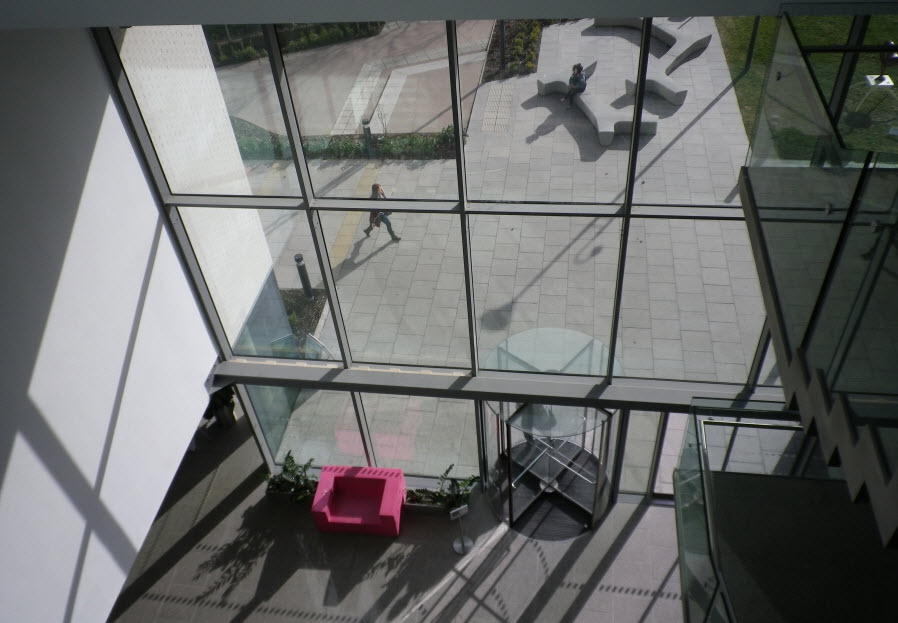 'An artist is somebody who produces things that people don't need to have.'
Andy Warhol

Definitions of prognosis on the Web: 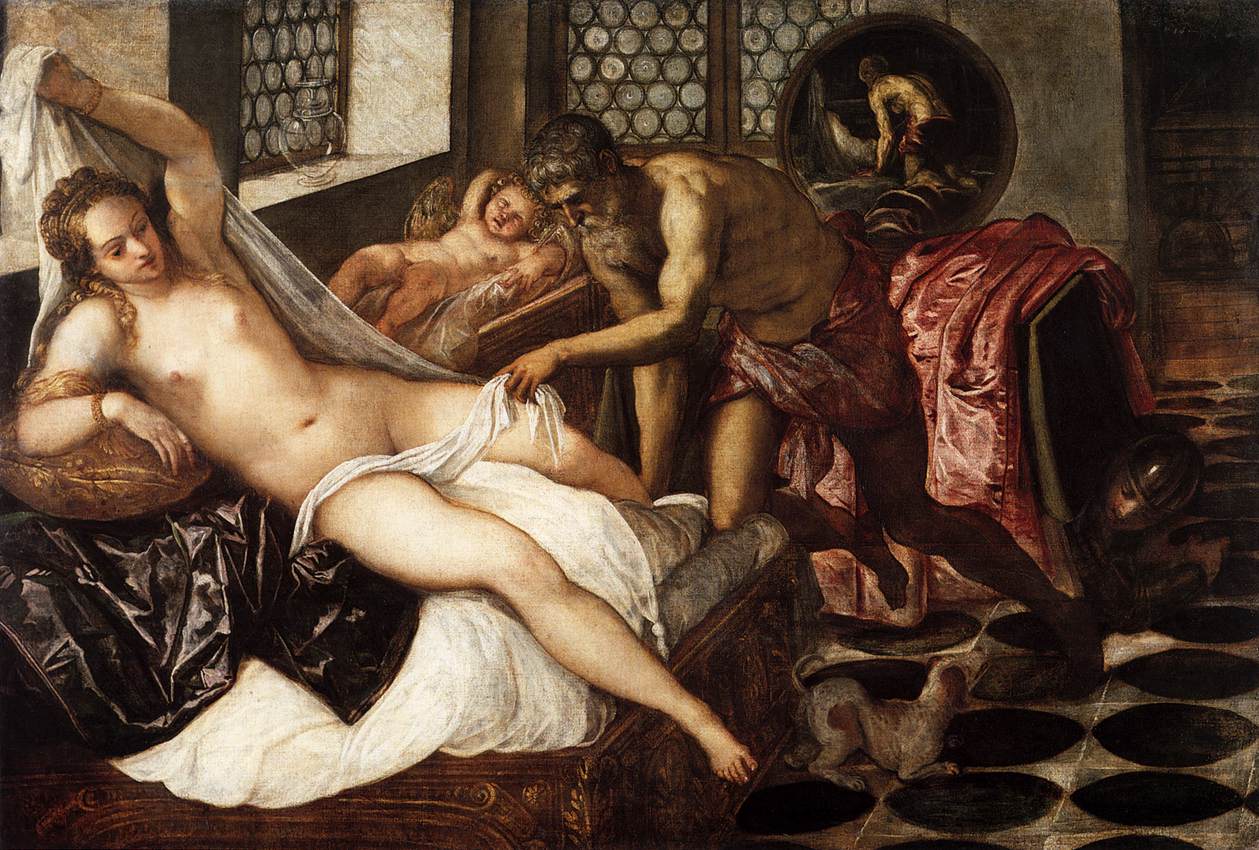 The painting comes complete with a jovial love triangle and unforgettable characters. Venus' husband, the gimp-legged Vulcan, staggers into the chamber and finding his wife naked in bed, he yanks back the sheets looking for her lover. Mars, looking rather less than heroic, is hiding under the bed and attempting to crawl to freedom. Unfortunately, the loyal family dog barks out upon discovering the god of war. On the ledge... cupid... the little god of love/lust... and the cause of this all, feigns sleep while looking out of the corner of his half-closed eyes.


"Venus Mars and Vulcan 1" was painted in oil on canvas, having the following dimensions: 135 x 198 cm; it is dated 1551, when Tintoretto was 33 years of age. Thus, it may be considered an Early Maturity piece of Tintoretto.
"Venus Mars and Vulcan 1" is on display in Alte Pinakothek, Munich, along with other famous artworks of the Mannerism period.


Among Tintoretto"s other signed paintings, we note: "Venus Mars and Vulcan - detail", dated 1551 and located at Alte Pinakothek, Munich; - "Venus Mars and Vulcan - detail 1", completed in 1551 and displayed at Alte Pinakothek, Munich; - "The Liberation of Arsinoe", finished in 1556 and located at Gemaldegalerie, Dresden; - "Women Playing Music", dated [?], presently hosted at Gemaldegalerie, Dresden
Posted by art wonder every day at 12:18

An Allegory with Venus and Cupid about 1545, Bronzino

An Allegory with Venus and Cupid 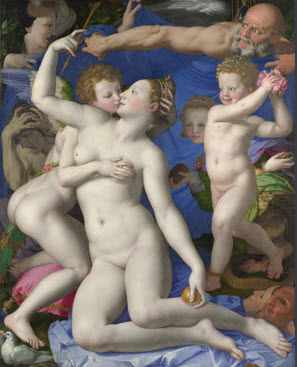 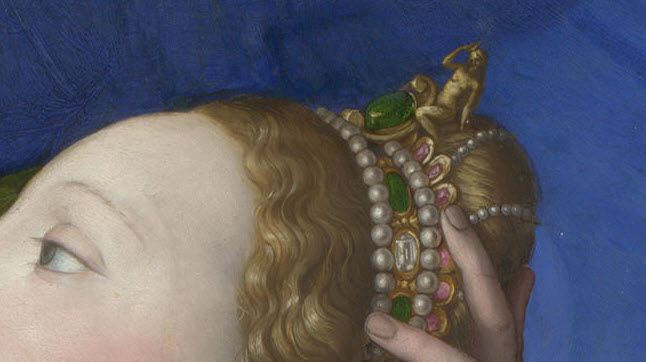 The picture is likely to be that mentioned in Vasari's 'Life of Bronzino' of 1568: He made a picture of singular beauty, which was sent to King Francis in France; in which was a nude Venus with Cupid kissing her, and on one side Pleasure and Play with other Loves; and on the other, Fraud, Jealousy, and other passions of love. Venus and Cupid are identifiable by their attributes, as is the old man with wings and an hourglass who must be Time (not mentioned by Vasari). The identity of the other figures, and the meaning of the picture remain uncertain.

The howling figure on the left has been variously interpreted as Jealousy, Despair and the effects of syphilis; the boy scattering roses and stepping on a thorn as Jest, Folly and Pleasure; the hybrid creature with the face of a girl, as Pleasure and Fraud; and the figure in the top left corner as Fraud and Oblivion. The erotic yet erudite subject matter of the painting was well suited to the tastes of King Francis I of France. It was probably sent to him as a gift from Cosimo I de' Medici, ruler of Florence, by whom Bronzino was employed as court painter. Bronzino was also an accomplished poet. The picture reflects his interest in conventional Petrarchan love lyrics as well as more bawdy poetic genres.
http://www.nationalgallery.org.uk/paintings/bronzino-an-allegory-with-venus-and-cupid 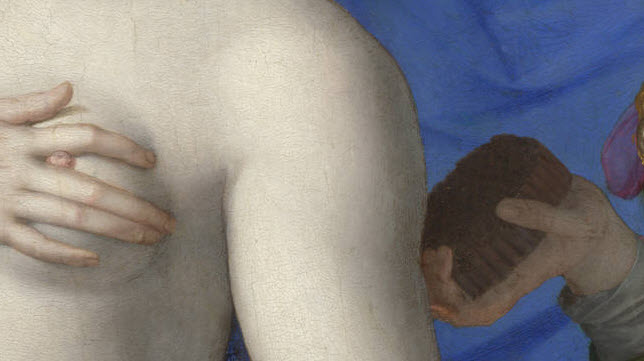 adolescent cupid who grabs her (Venus) boob while mom "slips him the tongue"
certainly "unsettling"... and unforgettable 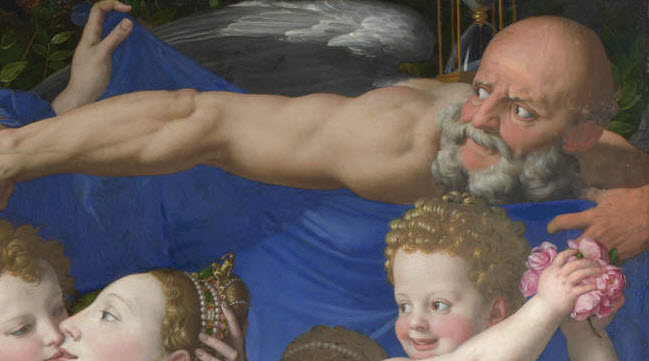 Father time pulls back the curtain revealing a rather illicit liaison between Venus and her son (!!! 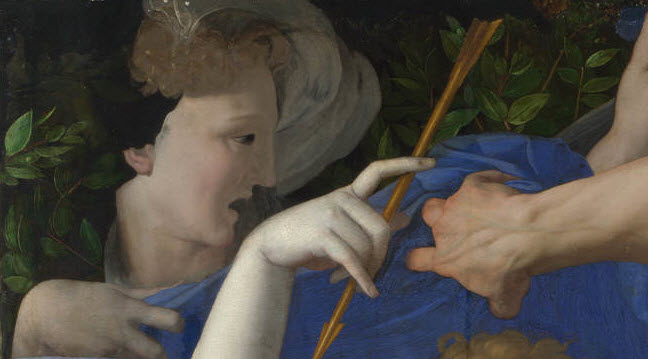 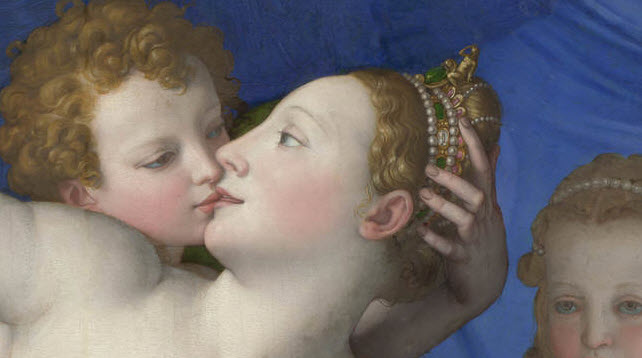 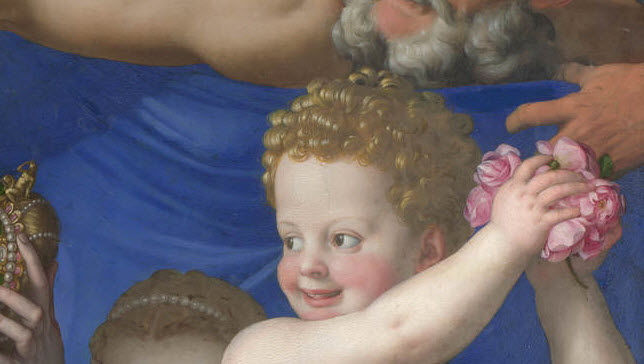 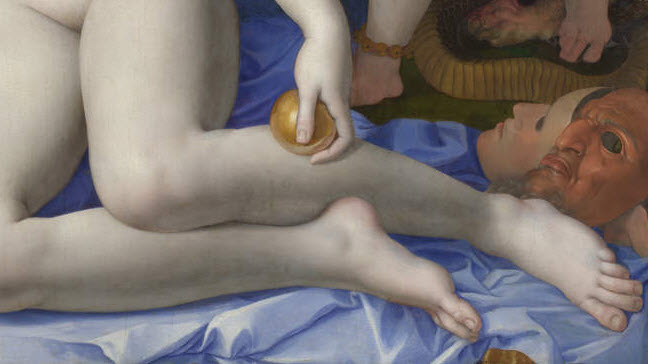 Charles Joseph Natoire’s “Le Reveil de Venus” or “ the “Awakening of Venus”.
I want to learn to read and  explore some of the symbols, themes and ideas of classical art. 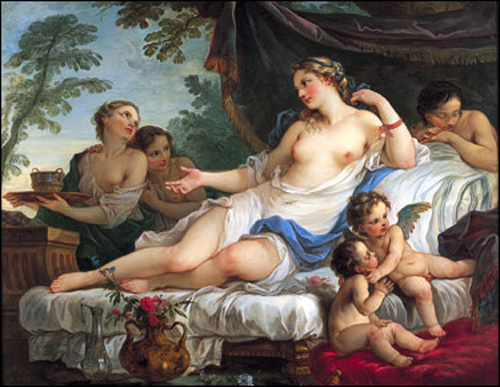 The lady reclining in her bed is Venus, the Roman goddess of love and fertility. (The Greek goddess was named Aphrodite.)

Venus is attended by three young ladies. They are the "Three Graces", the goddess of grace, charm and beauty. These three ladies are the attendants to Venus. Their names are Aglaia (splendor), Euphrosyne (mirth) and Thalia (good cheer). They were the daughters of Zeus and Eurynome.

I haven't figured out "who is who".

But here are some slightly closer views. 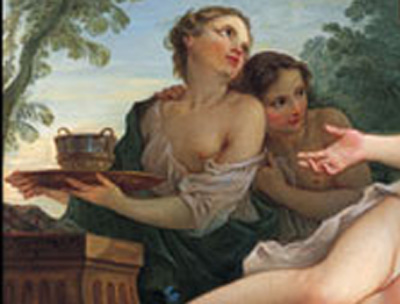 They are usually shown in art either dancing or waiting on Venus. They are usually shown with the two graces are facing out and the middle is facing in. Since they are attendants to Venus, they often will have flowers or other symbols that are associated with Venus.
They represent the three aspects of generosity- the giving, recieving and returning of gifts, benefits, love and friendship.


This is an Ancient Roman version from about 200 B C. This sculpture is now in the Louvre museum. 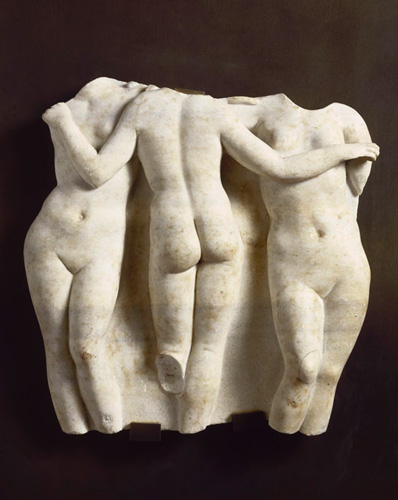 This version is by Raphael “The Three Graces”. It was painted in 1504-05 in Oil on panel and it is now in the Musée Condé, Chantilly. 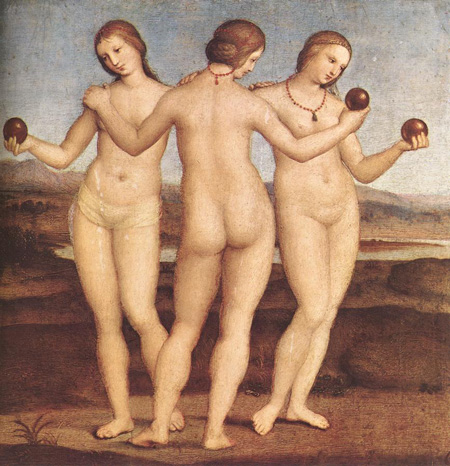 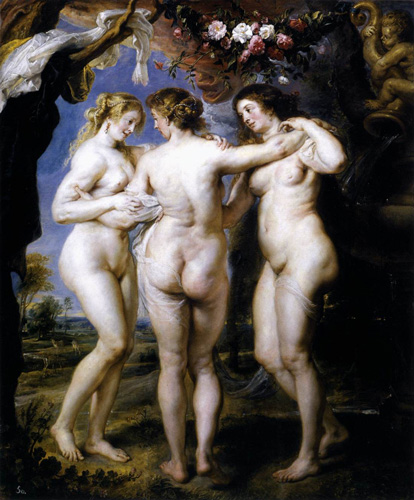 Now, back to the painting by Charles Natoire to look for more details.

In Academic Art, there are several “attributes” (symbols) that help identify the goddess Venus. She often has doves or swans (sometimes they draw her chariot), a scallop shell (she was born in the sea), often she is shown with flowers, particularly the red rose and/or myrtle (an evergreen).

In this painting, Natoire included the roses and myrtle. 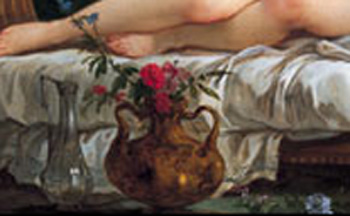 Another detail that is in Natoire's painting, a detail that is common in religious work, historical work, and mythological work alike is the "cloth of honor" draped behind Venus which symbolizes the prominence and importance of the person framed by the cloth.


It's a symbol found in all sorts of paintings.

Here's Titian's, "Pope Paul III with his Grandsons Alessandro and Ottavio Farnese" painted in 1546 on Oil on canvas. It's in the Museo Nazionale di Capodimonte, Naples. 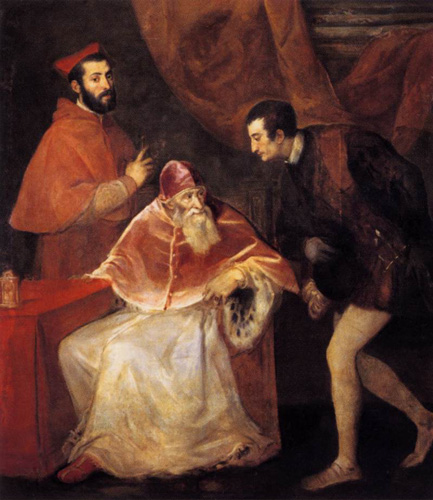 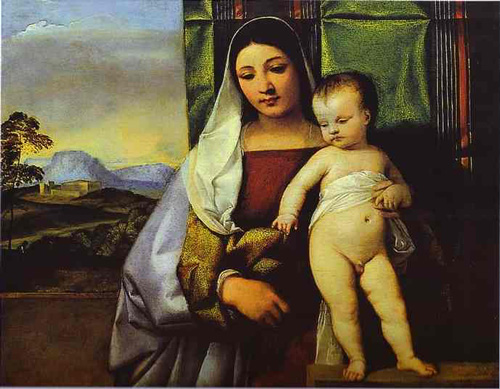 The two "cupids" are actually named Eros and Anteros. 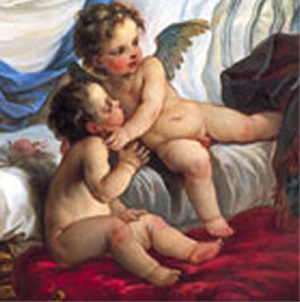 Eros (Greek)/ Cupid (Roman) is the god of love and sexual desire. In Ancient Greek mythology, sources disagree about how Eros was born and who was his mother. In most classical paintings he is shown as the son of Venus and so many paintings of Venus have a Cupid and Anteros in the composition. In Renaissance and Baroque art, he (and his brother) is usually shown as a chubby little baby with wings. But, in Greek art, he is sometime shown as a teenage boy. His attributes are a bow, arrows and quiver.

According to Greek legends, Eros was very lonely and languishing. Venus had Anteros so that Eros would have a playmate. This is suppose to symbolize that love must be answered if it is to prosper. Anteros is also the god who punishes those who scorn love or avenges unrequited love.

The ancient Romans used Cupid to decorate drinking vessels and other utensils. He usually was shown ready to fire an arrow into the heart of an unsuspecting victim. He had two kinds of arrows : golden arrows with dove feathers which caused someone to become aroused with love. He also had lead arrows with owl feathers that caused indifference. Of course, Cupid was mischievous and there was no telling who he chose to fall in love with who.


The first mention of Aphrodite in Greek mythology was related in Hesiod’s cosmological poem, the Theogony. 7th Century BC.

In the Latin poetry “On the Nature of Things” by Lucretius, he calls Venus to work her charm.

Is this really amor vincit omnia?

Full text can be download here with reviews & comments. 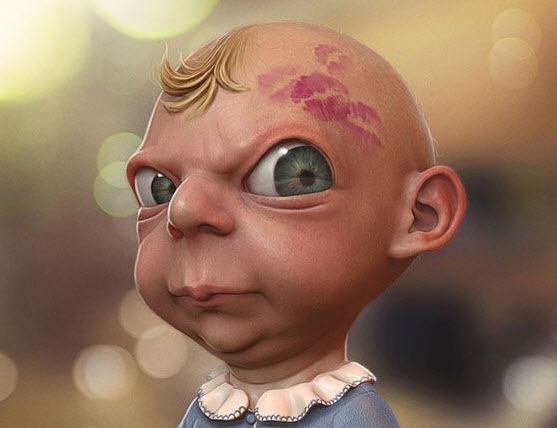