Richard Wilson’s "Slipstream" fit for a Queen at Heathrow

Richard Wilson’s "Slipstream" fit for a Queen at Heathrow 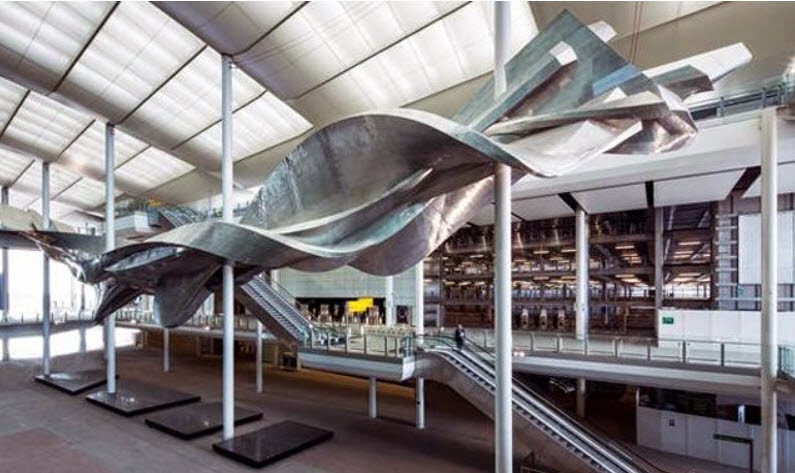 (David Levene. © LHR Airports Limited)
London’s Heathrow Airport unveiled the star art attraction at its revamped Terminal 2 this week. “Slipstream” by British artist Richard Wilson will get the royal approval when Her Majesty the Queen officially opens the terminal on 23 June.
The work is expected to be seen by 20 million passengers a year, making it one of the most viewed pieces of art in the country.

“Slipstream,” curated by public arts agency Futurecity will welcome passengers to the airport, and weighing 77 tonnes and at 78 metres in length, will be unmissable to all who pass through.

Made of twisting aluminium, the piece is said to be “inspired by the world of aviation, and captures the imagined flight path of a small stunt plane.” According to the official announcement, for Wilson, “the work is a response to the artistic challenge of capturing movement and a metaphor for travel; it aims to capture velocity, acceleration and deceleration in its twists and turns.”


Click Slideshow: Richard Wilson’s Slipstream Unveiled at London Heathrow
The Queen had opened the previous Terminal 2 nearly 60 years ago, in 1955. It was demolished in 2009. Known as the Europa Building, it was built to handle 1.2 million passengers a year, but by the late 2000’s was coping with 8 million. The Queen is expected to be joined by His Royal Highness The Duke of Edinburgh at the official opening, which is part of a £2.5 billion development by Luis Vidal + Architects.
Richard Wilson commented “After over two years of hard work I am delighted to see Slipstream finally unveiled in Heathrow’s new Terminal 2 : The Queen’s Terminal today. Slipstream is my largest sculpture to date and I have enjoyed the challenge of working on such a monumental scale and also working alongside such inventive engineers to realise this work. Slipstream is a metaphor for travel, it is a time-based work that responds to its location and I feel honoured that Slipstream will go on to be seen by millions of visitors travelling to and from the UK each year.”
Concept and lead architect, Luis Vidal commented, “Terminal 2 was designed to be a destination in itself. LVA’s objective was to attract passengers to arrive earlier than their departure time in order to enjoy the welcoming atmosphere and experience the wide range of amenities, services and retail Terminal 2 has to offer.”
Heathrow’s Development Director, John Holland-Kaye commented, “We are proud that Her Majesty The Queen has agreed to officially open Terminal 2 : The Queen's Terminal, the latest stage in Heathrow’s £11billion transformation. The new Terminal 2 stands on the site of the previous Queen’s Building, and the official opening on 23 June recognises the long association with Her Majesty The Queen. We are also very proud that the commission for Slipstream, which will be a feature of the new terminal, was won by distinguished British artist, Richard Wilson, working with a British architectural company, Price & Meyers, and an engineering company, CSI, based in Hull, all truly representing the best of modern Britain.”

source: http://uk.blouinartinfo.com/news/story/1028547/richard-wilsons-slipstream-fit-for-a-queen-at-heathrow
Posted by art wonder every day at 08:55