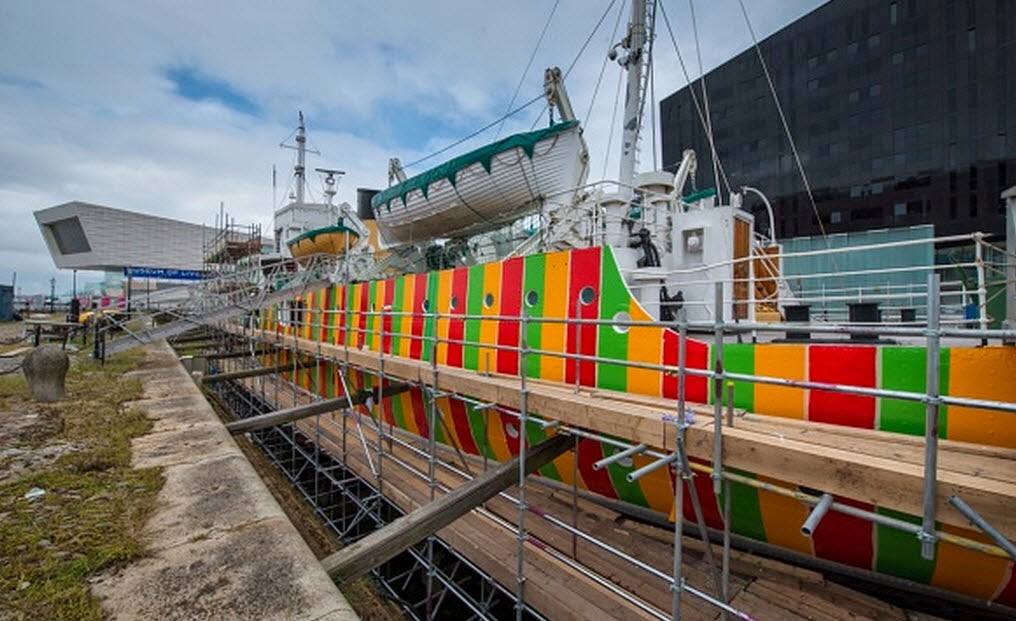 Painters from Cammell Laird have begun the process to transform the Edmund Gardner into a Dazzle Ship. Renowned artist Carlos Cruz-Diez has been commissioned to work with the idea of “dazzle” camouflage using an historic pilot ship conserved by Merseyside Maritime Museum. The ship, which is situated in dry dock adjacent to Liverpool’s Albert Dock will be painted by the Cammell Laird team to realise the design from Carlos Cruz-Diez.
CEO John Syvret said: "Cammell Laird is steeped in naval history and played a key role in the First World War. We feel honoured to help commemorate the occasion by 'dazzling' the Edmund Gardner. The project provides a meaningful way for Cammell Laird to reflect on the immense contribution the company made to the country during the war years.
“The newly dazzled Edmund Gardner will create an important and thought provoking public monument for Merseyside and the wider UK. We are also very pleased to support the Liverpool Biennial in its efforts to encourage visitors and investment to the region."
During World War One Cammell Laird completed work on nine battleships, 60 cruisers, 100 British and 95 United States destroyers, eight submarines, 123 armed merchant vessels and 107 merchant ships. The Cunard passenger liner Campania and the Isle of Man Steam Packet Co steamer Ben-My-Chee were also converted at Cammell Laird into the first seaplane carriers for the Royal Navy.
Dazzle painting was a system for camouflaging ships that was introduced in early 1917, at a time when German submarines were threatening to cut off Britain’s trade and supplies. The idea was not to “hide” the ships, but to paint them in such a way that their appearance was optically distorted, so that it was difficult for a submarine to calculate the course the ship was travelling on, and so know from what angle to attack. The “dazzle” was achieved by painting the ship in contrasting stripes and curves that broke up its shape. Characterised by garish colours and a sharp patchwork design of interlocking shapes, the spectacular ‘dazzle’ style was heavily indebted to Cubism.
Carlos Cruz-Diezis one of the great figures of contemporary art, especially kinetic-optic art. His works can be found in the permanent collections of Museum of Modern Art, New York; Tate Modern, London; Centre Georges Pompidou, Paris; Museum of Fine Arts, Houston; Wallraf-Richartz Museum, Cologne.
The Dazzle Ship will be launched on Thursday 12 June and will remain on display until the end of 2015 when she will be returned to her original Edmund Gardner livery.