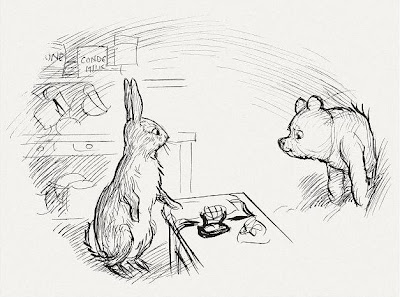 All illustrations are by EH Shepard.


These delightful illustrations are from the Sotheby's catalogue (2008) pertaining to the auction of forty two items, 'That sort of Bear': E.H. Shepard's Winnie-the-Pooh From the Collections of Stanley J Seeger and Christopher Cone.

Ernest Howard Shepard was born in London and encouraged to draw from a young age by his artist mother. He won a scholarship to the Royal Academy at the age of eighteen.

In the early years of the 20th century Shepard achieved some success with illustrated editions of Dickens and Aesop's fables. By 1907, Punch Magazine had accepted some of his drawings for publication although he wasn't a permanent Punch employee until 1921. He would remain there for more than thirty years.

In WWI, Shepard earned a Military Cross for bravery during service with the Royal Artillery in France and Belgium but he continued to sketch humorous vignettes which he submitted to Punch. In the 1920s, he was introduced to Alan (AA) Milne who reluctantly commissioned Shepard to do some line drawings for a children's book he had written. And the rest, as they say, is history.

Shepard and Milne were never particularly close but their collaboration on the four books - 'When We Were Very Young' (1924); 'Winnie the Pooh' (1926); 'Now We Are Six' (1927) and 'The House at Pooh Corner' (1928) - ensured that their names would be associated for eternity. Characters included Christopher Robin, Winnie the Pooh, Tigger, Eeyore, Piglet, Owl, Rabbit and Kanga.

The character of Winnie the Pooh was based on Milne's son's (Christopher) teddy bear, but the drawings were inspired by a toy bear named Growler, belonging to Shepard's own son. Growler would be mauled to death by a neighbour's dog, but Christopher's bear (and other stuffed Winnie the Pooh animals) circuitously made their way to the New York Public Library where I believe they still live. Late in life, Shepard was said to have voiced some resentment that the "silly old bear" had overshadowed his other illustration work, but he had expressed his fondness for the characters on many more occasions, so this phrase may have been more affectionate than has been reported*.

Although he pursued book and magazine illustration all through his life, Shepard's most notable work, beyond the AA Milne quartet, were the line drawings he produced for Kenneth Grahame's 'The Wind in the Willows', published in 1931.


Winnie the Pooh illustration expected to fetch more than £100,000

EH Shepard’s drawing of ‘Poohsticks’ game, one of English literature’s most familiar images, to be auctioned next month
One of the most famous images of Winnie the Pooh is expected to fetch more than £100,000 at auction next month.
The illustration of the bear playing Poohsticks with Piglet and Christopher Robin was first published in 1928 and has been in a private collection for more than 40 years. But the ink drawing by EH Shepard will now be sold by Sotheby’s next month.
The illustration featured in AA Milne’s book The House At Pooh Corner. It accompanied the closing scene of Chapter 6, “in which Pooh invents a new game and Eeyore joins in”. The three characters stand on the Poohsticks bridge as the mood changes from the high excitement of their new game to a more wistful atmosphere.
“For a long time they looked at the river beneath them, saying nothing, and the river said nothing too, for it felt very quiet and peaceful on this summer afternoon,” Milne wrote.
The drawing will feature in Sotheby’s sale of English literature, history, children’s books and illustrations on 9 December and is estimated to fetch between £100,000 and £150,000.
The auction house said: “The illustration can be counted among the most familiar and most loved cultural references in English literature.”
The original wooden crossing on which the illustration is based – known as Posingford bridge, at Hartfield farm, East Sussex – had fallen into disrepair by the 1970s.
It was carefully restored and reopened in May 1979 by Christopher Milne – the author’s son, who inspired the character of Christopher Robin. At that unveiling ceremony it was described as “as important a bridge as any in the world”. It was completely rebuilt in 1999.

EH Shepard drawing of Winnie the Pooh playing 'Poohsticks' with Piglet and Christopher Robin is to be auctioned. Photograph: Philip Toscano/PA