Portraits of Henry the Pious, Duke of Saxony and his
Wife Katharina von Mecklenburg: 1514

by Lucas Cranach the Elder 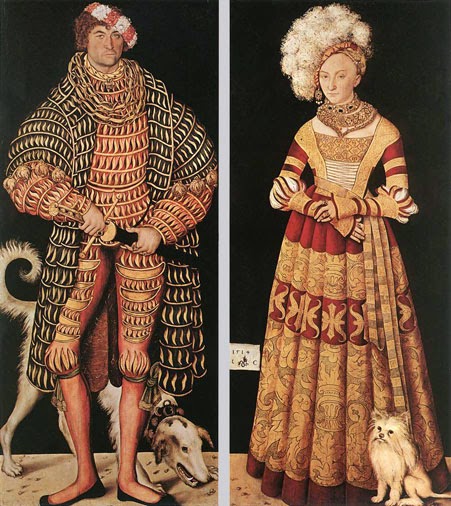 The canvas with the double portrait of the couple was divided into two parts and transferred to wood.
Following his visit to the Netherlands in 1508, Cranach experimented with Italo-Netherlands' ideas of spatial construction and with monumental nudes, but his true talent lay elsewhere, as is shown by the splendid full-length portraits of Duke Henry the Pious and Duchess Katharina von Mecklenburg, which mark the establishment of his official portrait style. Here, space and volume are annihilated; magnificent clothes, set off by a featureless backdrop, are topped by faces reduced to their essential, typical features.
The Saxon princess wears a colorful attire and head-dress characteristic for German noble women in the beginning of the 16th century.