About 15-minute walk from an Anglican (counterpart) Cathedral along Hope Street, it is 1960s' "futurism" best describes the exterior of Metropolitan Cathedral - what's locally know as "Paddy's Wigwam" or the "Mersey Funnel".
The huge interiors illuminated by natural light through the exquisite stained glass and it is worth the journey itself.
The huge and mysterious crypt it to have been a biggest Catholic Cathedral designed by Edwin Lutyens. This enormous cathedral would have had a dome larger than St Peter’s in Rome and at a stupendous 520 feet high, would have towered over Liverpool even today.
However - due to the Great Depression and the Second World War only the crypt was completed before the money ran out.
Frederick Gibberd’s 1967 building of concrete, steel and glass was obviously much less expensive to construct, and it is its challenging relationship with Sir Giles Scott’s Catalan Gothic splendour for the Protestant ship-owners; Liverpool Metropolitan Cathedral - the second - the Catholic Cathedral in Liverpool - is every bit as awe inspiring as the Anglican one. 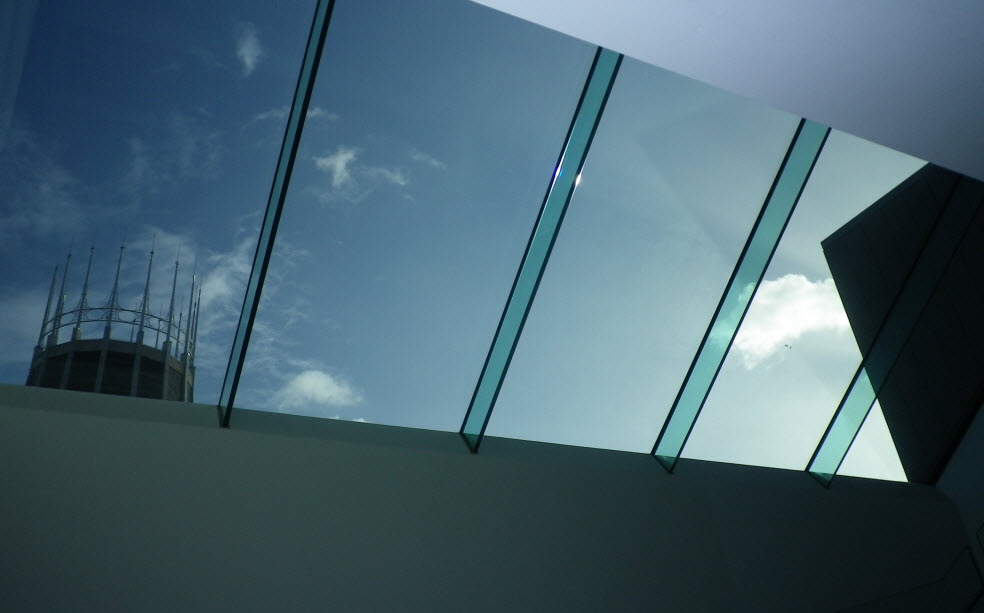 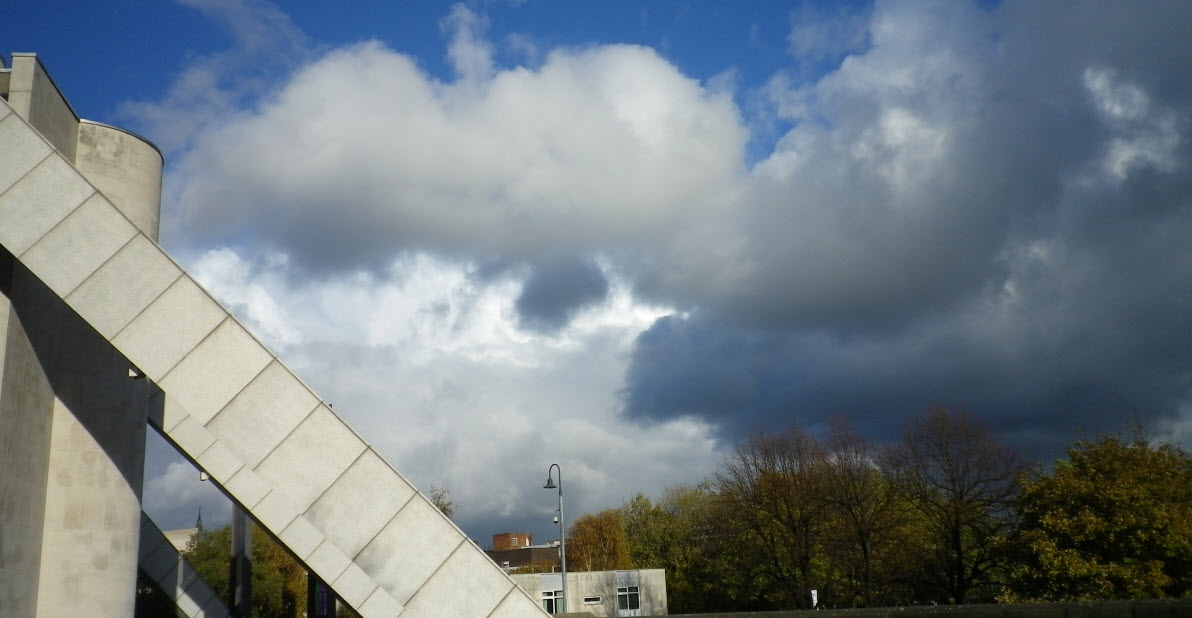 (All photos are taken by me, unless stated otherwise.
© 2014 All rights reserved.) 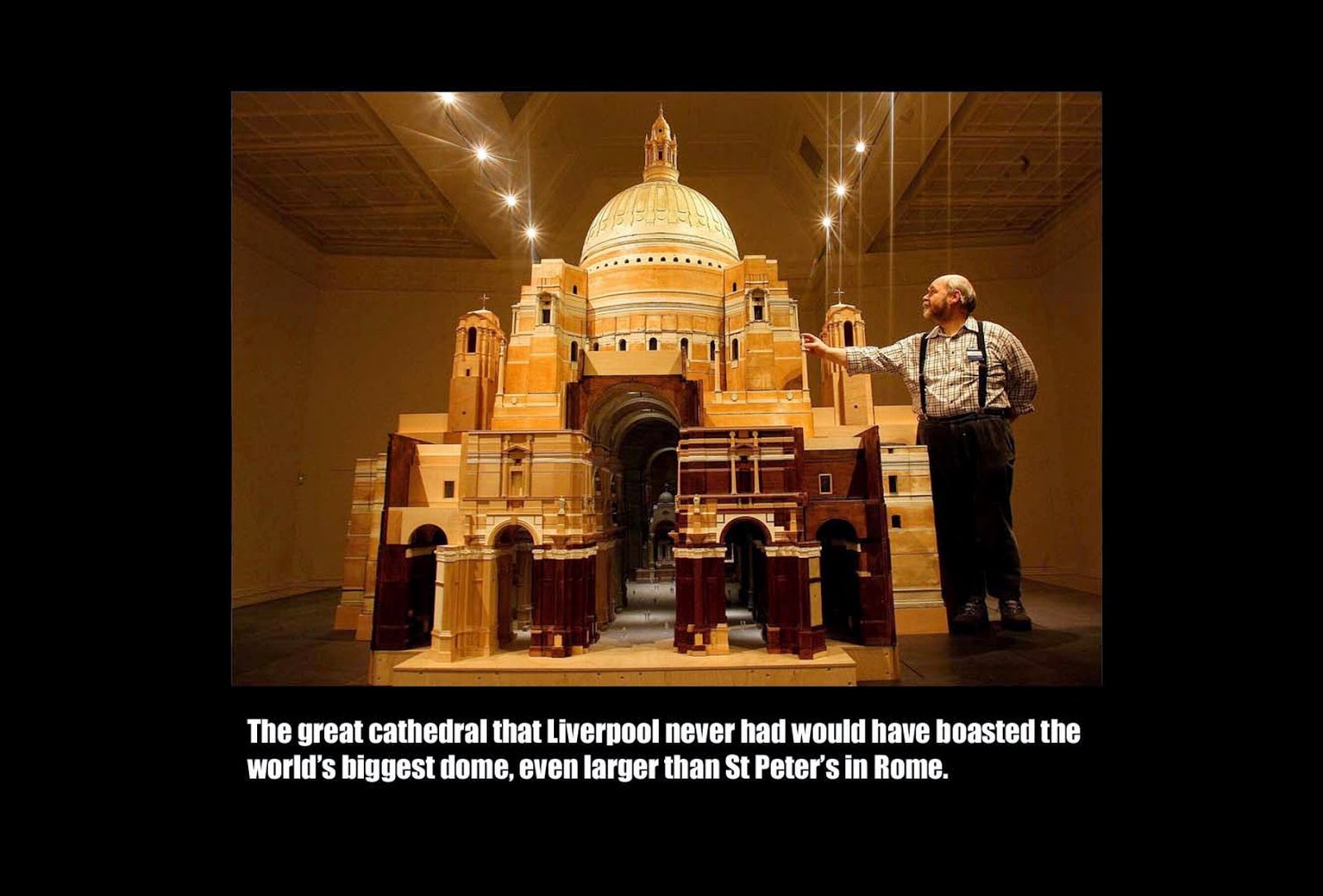 In pictures: Liverpool that never was - the schemes that didn't make it beyond the drawing board


Liverpool Metropolitan Cathedral of Christ the King replaced the Pro-Cathedral of St. Nicholas, Copperas Hill.
The cathedral is the seat of the Archbishop of Liverpool, the mother church of Liverpool's Catholics, and the metropolitan church of the ecclesiastical Northern Province.

In 1853 Bishop Goss awarded the commission for the building of a new Roman Catholic cathedral to Edward Welby Pugin (1833-1875), the son of Augustus Welby Pugin the joint architect of the Houses of Parliament and champion of the Gothic Revival.

By 1856 the Lady Chapel of the new cathedral had been completed on a site adjacent to the Catholic Institute on Saint Domingo Road, Everton. Due to financial restrictions work on the building ceased at this point and the Lady Chapel now named Our Lady Immaculate served as parish church to the local Catholic population until its demolition in the 1980s.

Following purchase of the present 9-acre site at Brownlow Hill in 1930 Sir Edwin Lutyens (1869-1944) was commissioned to provide a design which would be an appropriate response to the Gilbert Scott-designed Neo-gothic Anglican cathedral then emerging at the other end of Hope Street.

Lutyens' design would have created a massive classical/Byzantine structure that would have become the second-largest church in the world. It would have had the world's largest dome, being 510 feet compared to the 450 feet on St. Peter's Basilica in Rome.
The foundation stone for the new building was laid on 5 June 1933, but again financial restrictions caused the abandonment of this plan after construction of the crypt.

The new cathedral, designed by Sir Frederick Gibberd and consecrated in 1967, was built on land adjacent to the crypt. Its circular plan was conceived as a response to the Second Vatican Council's requirements for a greater participation of the lay faithful in the sacred liturgy.
"Mother Church earnestly desires that all the faithful should be led to that fully conscious, and active participation in liturgical celebrations " Second Vatican Council 1962-1965
Whether or not the intimate integration of congregation and clergy that is effected by this design is the proper fulfilment of that council's call is a topic that enjoys lively debate throughout the Catholic Church today.

Ironically - Lutyens was an Anglican, while the architect of the Anglican cathedral, Sir Giles Gilbert Scott - was a Catholic. 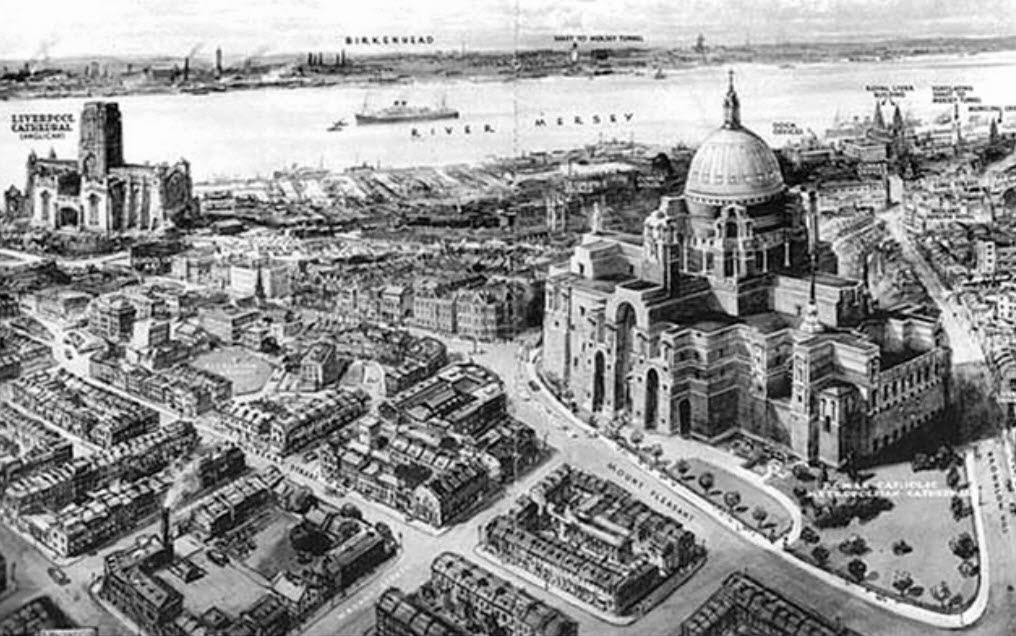 If completed, Edwin Lutyens’ colossal Romanesque cathedral would have reached 158m high, topped by a great dome due to be the largest in the world at 51m in diameter and 87m high.
Frederick Gibberd’s famous “Paddy’s Wigwam” in Liverpool was commissioned as a cut-price replacement for the grandiose scheme by Edwin Lutyens. Dedicated to Christ the King, Lutyens’ cathedral was to have been one of the largest in the world. Construction began on the former workhouse site at Brownlow Hill, but was interrupted by the second world war, and by 1958 only the massive crypt was complete. With costs estimated at £27 million, the Lutyens scheme was first scaled down and then abandoned. In 1960 a design competition was launched for a new design with just a £1 million budget for the shell structure. Frederick Gibberd’s circular design was chosen from 300 entries. It was consecrated in 1967, and holds a congregation of 2,300.
The grade II* listed building is notable not only for its form but for Gibberd’s collaboration with a number of artists, most notably John Piper who with Patrick Reyntiens created the stained glass window in the tower depicting the Blessed Trinity. Other artists include Elisabeth Frink, Ceri Richards and William Mitchell, who created the bronze sliding doors and the carvings on the Portland stone bell tower that forms the entrance.

source: http://www.bdonline.co.uk/paul-monaghan%E2%80%99s-inspiration-metropolitan-cathedral-of-christ-the-king-liverpool/5019227.article
Posted by art wonder every day at 12:49